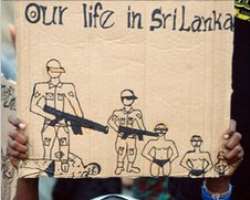 Australian Prime Minister Julia Gillard and the leader of the opposition have both announced new asylum policies.

Ms Gillard said negotiations were under way with East Timor on a regional processing centre for asylum-seekers.

She also said the suspension of processing asylum claims from Sri Lankans would end immediately but would continue for Afghans.

Elections are expected this year and asylum policies are the most politically contentious.

The opposition leader, Tony Abbott, said his asylum strategy would turn away refugee boats from Australia.

He also said he would revive detention centres in Pacific states (such as Nauru and Papua New Guinea).

'Not rednecks'
Ms Gillard's decision to re-start processing Sri Lankan claims for asylum takes place immediately; the same suspension will not be lifted for Afghans however.

The processing centre in East Timor, if agreed, is key to her strategy.

“The purpose would be to ensure that people-smugglers have no product to sell. Arriving by boat would just be a ticket back to the regional processing centre,” she told the Lowy Institute think tank in Sydney.

She said the aim was to “wreck the people-smuggling trade by removing the incentive for boats to leave their port of origin in the first place; to remove both the profitability of the trade and the danger of the voyage”.

Rebutting critics who said she was pandering to the anti-immigration lobby, she said it was wrong to describe Australians who had concerns about immigration as “rednecks”.

The BBC's Nick Bryant says that border protection looms large in the Australian psyche, and even though asylum seekers represent a tiny fraction of the country's annual immigration intake – just 1.6% – their unauthorised arrival has been magnified into a big political issue.

By unveiling new border protection policies, Ms Gillard is attempting to take the heat out of the debate ahead of the forthcoming election, he says.