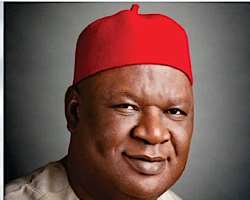 The former Secretary to the Government of the Federation, Senator Pius Anyim has debunked the misconception making rounds in meaningful quarters alleging his boycott of People Democratic Party, PDP, stakeholders meeting which was held in Enugu.

Senator Anyim, in a statement signed by the Director of his Media Office, Mr Judy Oko-Amanta, made available to journalists, in Abakaliki, said those peddling the fake publication were mischief makers, who were already willing tools of the State Government.

He said that those saying he was absent from the meeting because he was angry that the party was poised to making Governor Ifeanyi Ugwuanyi Leader of the party in the zone, were paid agents of the Ebonyi State Government, adding he was more interested in carrying out his national assignment of reconciling aggrieved members of the party.

There was social media publication which alleged that the former Senator was not present at the South-East PDP Stakeholders Meeting, even as the former President of the Senate pointed out that not only that he was conspicuously present at the meeting, but participated fully in all its sessions and ensured it ended well.

The statement read in part, “Our attention has been drawn to a publication by EbonyReporters.com, a faceless and mischievous online platform, run by state’s agents.

There is no iota of truth in the publication ditched out by EbonyReporters, a faceless online medium, whose purveyors are appointees of the Ebonyi State Government.

“EbonyReporters had reported that the former President of the Senate and Secretary to Government of the Federation, Chief Anyim Pius Anyim (Oshimiri 1 of Ndigbo), boycotted the South-East PDP Stakeholders Meeting, held in Enugu on Monday. The faceless and government attack-dog-like medium, also went further to report that Anyim did not show up at the event, because of leadership crisis currently rocking the party in the zone and was equally angry with the party, because he was not made the Leader of the PDP in the zone by Chief Ali Odefa, who allegedly preferred Gpvernor Ifeanyi Ugwuanyi, to him (Chief Anyim).

“It is important, also, to note that the South-East PDP Stakeholders Meeting, held in Enugu, on Monday, was held because of the Anambra State election that is coming up soon and it was to discuss the issues concerning the party in Anambra State.

“It is also worthy of note to Anyim’s traducers, that before and during the meeting, there was no contest about leadership. The party only resolved to formalise the Governor of Enugu State, who has been playing the role of the leader of the party in the zone, to continue to lead the activities of the party, even, Anambra.

“The Governor of Enugu State, Chief Ifeanyi Ugwuanyi, has been the natural leader of the PDP in the zone, who hosts all the meetings and therefore, there was no contest whatever about leadership. The PDP only formalised Governor Ifeanyi Ugwuanyi’s position as the natural leader of the party, to continue to effectively direct its activities in the zone.

“EbonyReporters.com should focus on the critical issue involving the brother-in-law of the first family, who was arrested and paraded for kidnapping in Abuja, on Monday and pray the situation doesn’t get out of hand.”