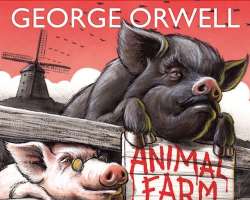 The book tells the story of a group of farm animals who rebelled against their human farmer, hoping to create a society where the animals can be equal, free, and happy. Unfortunately, the rebellion was betrayed, and the farm ends up in a state probably worse tha it was before, under the dictatorship of a pig named Napoleon .

This allegory though written in 1945 has continued to resonate through history and played as a predictory text to different situations. It is very easy to relate the events in Orwell’s book to the current trends in Nigeria.

Only last week was the media awash with news of reconciliatory/ consultative meetings between the ravaging, manancing bandits who have wrecked havoc in the North-West Nigeria and the government as initiated by Governor Bello Mattawale of Zamfara and led by the chief negotiator, Sheikh Gunmi.

The meeting which is not the first of its kind as the Sokoto state governor, Bello Masari had in time earlier, held negotiation talks with these miscreants; Kaduna state governor Mallam Rabiu El-Rufai, had proudly told the world how as part of his efforts to avert further attacks by these same bandits in Kaduna, had paid them handsome sums of Naira to placate them.

After the meeting, we were treated with the sour results from the meeting as served by Sheikh Gunmi, who amongst other recomendations requested for amnesty for the Bandits as well as a Ministry to look into matters relating to the region- North East Nigeria.

Reasons advanced by Gunmi for these ridiculous conditions for withdrawal from criminality by the bandits amongst others, was the fact that in a previous regime, militants from the Niger Delta were granted amnesty and also a ministry of Niger Delta affairs was established to look into their grudges even as Goodluck Ebele Jonathan who was himself a Niger-Deltan himself even awarded contracts including defence contracts to repentant militants.

This logic and reasoning may sound nice for those who may say “what is goose is good for the gander” unfortunately it also brings the issue animals being more eqaul than others, just as it undermines the the issues of rule of law, where no man is above the law and crime should have consequences rather than reward put side by side the reason why Nigerians booted out an unfortunate Jonathan.

In 2015 it was for this reason and many others, Nigerians especially Middle Belt Nigeria voted massively against the government of Goodluck Jonathan, which was accused of tribalism, sectionalism, nepotism amidst incompetence. He was believed to be weak and unpeople in his decisions even as many claimed he was not in-charge of the government but only a puppet in the hands of certain schemers.

Goodluck’s governement faced criticism and was also sacrificed on the altar of Muhammadu Buhari’s no-nonsense tance. Buhari’s previous regime as a military dictator where corruption and indiscipline had no place, was the prism through which Jonathan’s percieved ineptitude was viewed. Buhari was seen as the direct opposite of a Jonathan; the exemplary leader; one who wil treat all Nigerians as equal andnot award contracts to incompetent bandits nor will he be sectional.

Yes. when Muhammadu Buhari took over office in 2015 he made a very paradoxical statement which had intense undertone. Not many watchers saw the red flag in that statement. He said “I belong everybody but I belong to nobody”, Nigerians went rejoicing “we’ve made the right choice”, “Here comes the messiah, Hossanah”. Vey few Nigeriansheard the message therein.

It has been a long 6 years and 9 months into a relatively torturous life as a Nigerian with the leadership of St. Buhari who has taken the nation on a roller-coaster ride from a percieved clueless Jonathan administration to an apologetic, nepotic, tribalistic, sectional and unpeople government whose only angenda is sectional.

From when the Buhari Adnministration took over it was not a hidden secret that the administration ws on a nepotistic mission aimed a promoting the fortunes of the far north. He negated federal character, not for copetence but for the sake of ethnic and regional satisfaction; he compromised national security on the altar of propagnda and sectional chauvinism; He neglected all other regions and tribes as sacifice for the pursuit of a selfish ethnic agenda. The nation is been run on Napeleon’s maxim of “ all animals are equal but some are more equal”.

We have seen the establishment of North East Development Commission to placate the North East militants of Boko Haram; We have been asked to accomodate land grabbers and outright criminals who have invaded our country looting, killing, maiming and raping our women under the guise of herdsmen; we have seen the government reward incompetent service chiefs with ambassadorial positions because of where they come from; we have seen incompetent ministers reappointed on basis of “mutani ne”.

Today the governement has already taken an obvious stance which makes all other nigerians(non-fulani), second class citizens.

Only recently the Nigerian Army shamelessly but gruesomely murdered an unarmed Terwase Akwaza AKA Gana, who was granted amnesty by the Benue state government for being a criminal in the mould of the revered North Western Bandits. Nobody has seen anything wrong, no ministry has been established.

Gana was touted to apart from banditry, known to be the only opposition to fulani occupation of the Benue trough as he was in a popular video heard conffessing how the fulani herdsmen had offered him millions (he had rejected) to allow him ravage th region. He was murdered to pursue an agenda.

One may ask how different is Sunday Ighoho ( let it be known that i support his cause, he is a hero to many including me), from Gana who is ready to challenge anyone or break any law to protect his people. It might even also sound right to compare both of them to the “one” o has granted fulani “special citizen” status in the country, breaking every law.

Only last year the South Western governors came together to form the Amotekun corps in the wake of incessant attacks on helpless farmers in the region, despite condemnation (even though it allows similar organisations in the North like the Hisbah commission) by the federal government, these armed squad has come to say and are thankfully protecting its people. Meanwhile Benue state has snce been battling with the issue of legitimacy and national acceptance of its anti-grazing law as well as livestock guards to protect it farmers amidst stiff opposition from the Buhri administration in favour of the now opperssors- the untouchable fulani herdsmen.

Since revolutions may be treason one only prays, God in his infinite mercy fastens the days and nights so this fulani administration speeds through to its end, while hoping there is still something left of our dear Nigeria.

Ati Terkula writes from Makurdi and could be replied via email [email protected] or twitter via @Africa_Pikin, Facebook: facebook.com/terkula.ati/