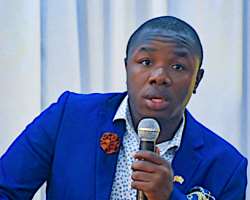 The City Government of Monrovia under the leadership of Mayor Jefferson T. Koijee on Friday held a prayer service which marks the beginning of a week long celebration of Monrovia Day.

February 16 each year is celebrated as Monrovia Day. The celebration of Monrovia Day is in accordance with City Ordinance # 4 .

The prayer service intended to appreciate God for the tremendous progress Monrovia as a Capital City continues to experience under the leadership of President George Weah since its existence brought together employees of MCC, residents of Monrovia amongst others.

Rev. Beatrice Gaysue who served as Special Guest during the prayer service admonished City Hall’s employees to continue to coexist with the spirit of togetherness and unending unity.

According to Rev. Gaysue, the City of Monrovia will continue to experience rapid growth and development as long as employees of the City Government and its residents remain in prayer and work together in achieving the collective goal of the City. She noted that only a team work can ensure that Monrovia becomes clean, green and safe. Rev. Beatrice Gaysue spoke under the them “Reward”. For his part, Mayor Jefferson T. Koijee lauded residents of Monrovia and employees of the Monrovia City Government for their continuous strive in ensuring that Monrovia is clean, green and safe.

Mayor Koijee wants residents of Monrovia and employees of the City Government take full ownership of this year’s Monrovia Day celebration and fully participate to reflect on the gains that they have made over the years in ensuring that Monrovia is clean, green and safe and appreciate God for his goodness.

Mayor Koijee reaffirmed his commitment to ensure a beautiful and safe Monrovia and encouraged employees and residents of Monrovia under the George Weah led administration.