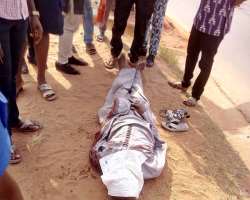 It was a rueful moment in Awka the capital city of Anambra, as a hit-and-run driver knocked down an unidentified young man attempting to cross the Enugu—Onitsha Expressway from the U.B.A. axis, along Aroma Junction.

According to her, the accident occurred at about 1520hrs on February 5, with both the driver and the victim unidentified.

The statement reads in parts, "Unidentified driver of unknown vehicle knocked down unidentified male adult crossing the road by Aroma opposite UBA BANK AWKA today 5th February, 2021 at about 1520hrs.

"Eyewitness account shows that the Pedestrian was knocked down while crossing the road. "The victim was taken to Amaku hospital by FRSC rescue team from Anambra State Sector Command. He was confirmed dead by the Doctor on duty and his body deposited at Amaku mortuary.

"He warned drivers to avoid speeding especially in built up areas, they should use the maximum speed limit of 50km/hr.