Ooni & Igboho Distraction As Fulani Use Hausa In Killing Fields 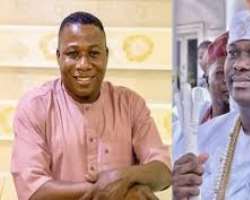 The issue is bigger than the Ooni and those that disagree with his approach. Ooni is respected like the Supreme Court without its own Police or Army. Whatever his age, Ooni is not infallible but he has a wealth of cultural experts around him. This is why his subjects, no matter their age respect his office. Even when his people disagree with him. African respect for cultures dictates that we must tread cautiously. The matter at hand surpassed any personal disagreement between Ooni and Sunday Igboho.

If Sunday Igboho did not stand up as Oranmiyan-sent from aggrieved people that had enough, there are others willing to sacrifice their lives, not only in Yorubaland but all over West African countries where Fulani worldly known as the fourth most dangerous Terrorist group are kidnappers and terrorists in disguise for cow grazing called freedom of movement. Please stay focused and save your energy for the real Prize, Fulani have captured Hausa the way the British had captured African countries.

Fulani terrorists all over West African countries are more powerful in Nigeria than anywhere else simply because they use Hausa as their foot terrorists. When Gov. Akeredolu of Ondo and Gov. Samuel Ortom of Benue States called out the impunity of Fulani audacious daylight crimes like Iskiku Wakili, Buhari did not call the Chief of Police for the arrest of the heinous criminals or give shoot on sight order since Fulani from his kitchen cabinet sent them. They are all members of Miyetti Allah, their Cattle Breeders Association of Nigeria. The Political George Orwell Animal Farm which Northern politicians and Fulani pastoralists report to.

Buhari opened the border to all Fulani, jihadist terrorists and Sahelian North of Africa, many of who were mercenaries in Libya. Fulani Miyetti Allah went further, the invading marauders lay claim to every land. Yes, Fulani suffered a few losses compared to their victims. But only Fulani always got away scot free. There are greater losses suffered continually throughout the country perpetrated by Fulani and their one-drop of blood Hausa captives, without deterrent or anyone declared wanted by Buhari's Police Chief.

Some of the Seriki outside their homes command more respect, enjoy more security and wealth than the local Oba that host them in his town. Nobody can contemplate an Oba, Obi or Igwe more powerful than the Fulani Emir in Northern states. It may be about time to stop any Oba, Obi, Igwe or Seriki outside their dominion and subject everyone to the authority of the local Chiefs. If you want to live outside your ethic base, respect your hosts. The Federal Police and Army favor Fulani anywhere. This is the reason more people are calling for local and state Police.

Who is fooling who? The whole country sees through local Seriki aiding and abetting crimes as negotiators that appease Fulani kidnappers and terrorists after ransoms are paid through the same Seriki taking his cut. Fulani have not learned from their failure to contain Boko Haram they created against Christians. As you spread your military and police thin, they become ineffective. These Fulani cow owners are sending their Hausa captives to most ethnic bases outside their Caliphate but cannot capture Sambisa Forest for grazing and freedom of movement. You cannot pacify all the ethnic Chiefs unless those Chiefs want to face revolts or face Calabash.

Nigeria authorities will prosecute any slight or crime against Fulani. But when people defend themselves, the Police and Army come out in force. Nobody prosecuted Fulani impunity worldly known as the fourth most dangerous Terrorist group. Nigerians are deterred from carrying homemade guns but Fulani have easy access to AK47 without license. The victims of Fulani crimes in Nigeria have less protection than foreigners. We know how hard Fulani oligarchy works to seek the release of criminals in Saudi Arabia or forgive Abacha money laundering family; only had to claim one drop of Fulani blood.

Despite the effort of Aminu Kano grassroots campaigns, the Northern power is still concentrated in the hands of minority Fulani. All the Heads of State had sought support from this narrow group, except General Abacha that replaced the Sultan of Sokoto Gen. Babangida had installed. Even then, it was one Fulani replacing another. Obasanjo also tried during his reign by replacing Fulani entrenched in powerful military positions with those from North- central. The "core North" cried marginalization then since Igbo were also brought into powerful positions since the Civil War.

The majority of Talikawa in the North are Hausa too poor to compete because of their Suppression into Poverty by their minority Fulani captors. The reason many Southern leaders had supported affirmative action for the North was to bring them on the same level of rational political discussion for progressive ideas. It was not because the Northerners were less educated since many of them were literate in the Arabic studies before their Southern brothers.

However, religious opium either Christian or Muslim are always very conservative and expression of opposite views highly discouraged. No where are the leaders, especially the descendants of Usman Dan Fodio worshipped more than Northern Nigeria. Dan Fodio type of Muslim Religion keep a firm grip of the Hausa majority. Most Hausa that want to be elevated into the circle of elites must claim blood relationship with Dan Fodio Fulani. Hausa have almost given up on the Seven States headed by Fulani Emirs.

Buhari, despite his FULANI one drop blood, was overthrown once and would not take another chance. So he has to consolidate power in his kitchen cabinet and support from the Fulani at the expense of the Hausa talikawas. Buhari has a gut feeling for injustice but would not cut his nose to spite his own face. That is, he would not give anyone the chances of overthrowing him. This is why he tried to pit Ooni against Sunday Ogboho.