Teacher to spend two years in prison for sex with students, including in car before school 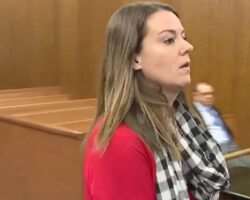 A former Ohio high school teacher will spend two years in prison after being convicted of having sex with two student on numerous occasions, both in her home and in her car in a park.

On Thursday, Dunker was given two years in prison for each count, but the sentences will be served concurrently. After her release, she will be on probation for five years.

Dunker will be registered as a Tier III registered sex offender. She will have to re-register every 90 days for the rest of her life.

Dunker, now 31, was once employed at Bedford High School in Bedford, Ohio. The alleged incidents occurred between November 1, 2018 and October 19, 2019.

In one instance, according to the indictment, Dunker allegedly picked up one of the students prior to school and had intercourse with him in her car in a park. Two of the other alleged incidents occurred at Dunker’s home.

A separate charge accuses Dunker of tampering with evidence on or about November 6, 2019, while “knowing that an official proceeding or investigation was in progress.”

Dunker did not speak during sentencing, but the prosecutor said that her crimes were very serious.

“Teachers are expected to be role models to their students and communities which they serve,” Prosecutor Michael O’Malley told the court. “She took advantage of these students and now must face the consequences.”