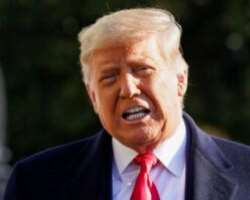 A plane was spotted flying over Mar-a-Lago in Palm Beach Sunday with messages meant for Donald Trump , TMZ has learned .

“TRUMP WORST PRESIDENT EVER,” one banner read, while the other said, “TRUMP YOU PATHETIC LOSER GO BACK TO MOSCOW.”

On Jan. 20, Trump and his wife Melania took their final flight aboard Air Force One, leaving the White House for Mar-a-Lago hours before Joe Biden was sworn in as the 46th President of the United States. Trump announced in November 2019 he was changing his residency from New York to Florida. “They haven’t treated me properly, I pay millions of taxes,” he explained, per ABC News. “Millions and millions of dollars in New York and they’ve never treated me, you know, since I became president, they just haven’t treated, I think the office with the kind of respect.”

One year later, New York Times found out Trump paid $750 in federal taxes in 2016 and 2017. The move was most likely due to the fact that he’s liked more in Florida than New York. Despite his best efforts to be in a place where he isn’t despised, a skywriter was able to figure out a workaround to let him know how a majority of Americans feel about him.

Once a safe haven for Trump, Mar-a-Lago has also seemingly turned against him with members who have reportedly “silently walked out” since his departure from the White House. Some reportedly don’t want to be associated with the one-term President while others have complained about the food being terrible. “It's a sad place … it's not what it was,” Laurence Leamer, historian and author of Mar-a-Lago: Inside the Gates of Power at Donald Trump's Presidential Palace, said.