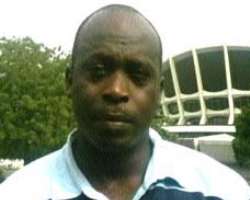 I was born in Benue State. My father as a soldier was transferred to Bauchi State immediately after the Nigerian civil war in 1970. Because he moved around a lot, I had my primary and secondary education in different parts of the country between 1977 to 1981. It was difficult for me to gain admission after my secondary school, so I worked briefly with the National Arts Council as an artiste.

In 1996, I enrolled for a certificate course in Cultural Studies. After which I worked with Bauchi Radio 2, FM Station as a DJ. After about a year, the National Troupe of Nigeria came for auditioning in Bauchi. I went for the three auditions and passed. That was how my real journey into acting began. I travelled all over the globe with the troupe, acting and dancing. In 1996, my contract with the troupe expired and I left. But in 2001, I had a recall to the troupe as a marketing officer. Right now, I am the stage manager of the NTN.

I grew up in the barracks under the strict but watchful eyes of my father who was a soldier. I grew up admiring my father's smart army uniform, high discipline, his programmed and regimented life style. I had this larger than life dream of getting to the peak of military career. Then I loathed my father because he usually beat me with the rod, but now, I bless him for it. His life style really robbed off on me even though I did not end up a soldier. I found myself toying with a different profession entirely.

What shot me to limelight was Winds of Destiny, a soap aired on NTA Network in 1996. I played the role of Alhaji Tanko Adamu. But aside that, I have acted in many soap operas, films, TV dramas, stage plays, radio programmes, documentaries. I have actually lost count of the productions. I also acted in Queen of Aso rock, What a woman wants, Paradise, Together as one, Sweet and sour, and many others. There is the tendency to lose count of these productions as one gets older in the profession.

Non that I can remember or that is significant. I remember there was one day I came home from the theatre. As I was about entering my car, I saw students who came on excursion to the National Arts Theatre. They saw me and before I knew what was happening, they were all over me. And suddenly one of them demanded ice cream. That was trouble for me because I had just N940 in my pocket, which would not be enough for them. What I did was empty my pocket for them and disappeared from the scene.

Sweet and sour produced by Zeb Ejiro on NTA Network was challenging. That was the day I came face to face with Alex Osifo. The man I watched on TV in Bauchi as a teenager, But by the time we started, it was easier than I thought. Another one was in 1991, while doing a stage performance of Things Fall Apart at the main bowl of the National Stadium with Uncle Bayo Oduneye. It was my first act and my friends were there to watch me.

They sat in the first row, which did not make things easy. But because my custume disguised me, I had a good outing.
All roles are challenging, it now depends on your attitude and assimilation of such roles. This is where the expertise and versatility of an actor come to play.

I have not refuse any role, I have only doctored them. Nigerians are always in a hurry to produce and make money. That is why haphazardly made films flood the market everyday. I believe a good story should be written and left for four or five months. After which it is picked and brushed up. It is at this stage that proverbs, phrasal verbs, salient points, moral inclination, and other things that were not there can be added or removed.

Stage is more challenging. You have to get all the points in your head, and also the acts right. Every thing is timed and fulfilling at the same time. It is beautiful and nice, but if you miss one, you lose all. Stage plays have gone down now, it has been bastardized, and so, safety is no more there. But I believe there would be a revival soon.

Radio production for me is a sweet experience. You are simply acting with your voice, not your body. You are invisible, not scared of the audience and so you have a steady voice that cuts across to your audience. But on television, the message you can not pass in words, can be passed with movement and gestures. That is the only advantage television has over radio.

It's been tough. It is a pady-pady business. You don't know any Jack, you would not
get any Jack. I have had reasons to complain about a role that did not go down well with me. Sometimes you are instructed to slap a woman when the line does not indicate that. But in any case, why should I slap a woman on screen. It is morally wrong because teenagers would think violence is right.