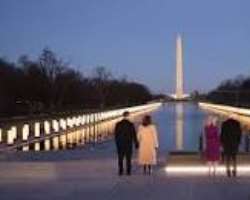 Joe Biden on Wednesday became the 46th president of the United States, vowing a “new day” for the United States after four years of tumult under Donald Trump who in an extraordinary final act snubbed the inauguration.

Two weeks to the day after Trump supporters violently rampaged at the US Capitol to overturn the election results, Biden took the oath on the same very steps alongside Kamala Harris, who was sworn in moments earlier as the first woman vice president.

Biden, putting his hand on a family Bible, repeated after Chief Justice John Roberts the presidential oath — that he will “preserve, protect and defend the Constitution of the United States.” Joe Biden (L), flanked by incoming US First Lady Jill Biden is sworn in as the 46th US President by Supreme Court Chief Justice John Roberts on January 20, 2021, at the US Capitol in Washington, DC. SAUL LOEB / POOL / AFP

“It's a new day in America,” Biden wrote on Twitter before the inauguration as, in a sign of his push for unity, he prayed alongside congressional leaders at a Roman Catholic church. US President Joe Biden delivers his Inauguration speech after being sworn in as the 46th US President on January 20, 2021, at the US Capitol in Washington, DC. Patrick Semansky / POOL / AFP

Biden, who at 78 is the oldest president in US history and only the second Catholic, took office amid enormous challenges with the still-raging Covid-19 pandemic having claimed 400,000 lives in the United States.

Central Washington took on the dystopian look of an armed camp, protected by some 25,000 National Guard troops tasked with preventing any repeat of the January 6 attack that left five dead. The Supreme Court reported a bomb threat Wednesday morning.

Read Also: Kamala Harris Sworn In As US Vice President

Harris, the daughter of Indian and Jamaican immigrants, became the highest-ranking woman in US history and the first person of color as the nation's number two.

She and her husband Doug Emhoff — America's first-ever “second gentleman” — were escorted to the inauguration by Eugene Goodman, a Black police officer at the Capitol who lured the mostly white mob away from the Senate chambers in a video that went viral. Kamala Harris is sworn-in as vice president of the United States on Wednesday, the first woman ever to hold the post.

Unprecedented atmosphere
With the general public essentially barred from attending due to the pandemic, Biden's audience at the National Mall instead was 200,000 flags planted to represent the absent crowds.

“It's a day a lot of us have been trying to visualize for a long time. We couldn't have guessed that the visual would be quite like this,” Pete Buttigieg, the former presidential contender tapped by Biden as transportation secretary, told reporters.

Biden nonetheless brought in star power — absent four years ago with Trump — as Lady Gaga sang the national anthem and Tom Hanks prepared for a televised evening appearance with the new president.

Biden, who was vice president under Barack Obama and first ran for president in 1987, plans to kick off his tenure with a flurry of 17 orders to turn the page on Trump's divisive reign.

Officials said Biden will immediately rejoin the Paris climate accord and stop the US exit from the World Health Organization and set new paths on immigration, the environment, Covid-19 and the economy.

He will also end Trump's much-assailed ban on visitors from several majority-Muslim countries and halt construction of the wall that Trump ordered on the US-Mexico border to stem illegal immigration, the aides said.

Many overseas leaders breathed a sigh of relief at the end of Trump's hawkish, go-it-alone presidency, with Biden's team pledging greater cooperation with the rest of the world.

Ursula von der Leyen, president of the European Commission, called Biden's inauguration “a demonstration of the resilience of American democracy,” as well as “the resounding proof that, once again, after four long years, Europe has a friend in the White House.”

Trump vows to be back Outgoing US President Donald Trump and First Lady Melania Trump address guests at Joint Base Andrews in Maryland on January 20, 2021. President Trump and the First Lady travel to their Mar-a-Lago golf club residence in Palm Beach, Florida, and will not attend the inauguration for President-elect Joe Biden. ALEX EDELMAN / AFP

For the first time in 152 years, the sitting president did not accompany his successor to the inauguration after Trump for two months falsely alleged that fraud cost him a second term.

Several hours before the inauguration, Trump, 74, and first lady Melania Trump walked a short red carpet on the White House lawn to the Marine One helicopter, which flew near the inauguration-ready Capitol before heading to Andrews Air Force Base on Washington's outskirts.

“This has been an incredible four years,” Trump told several hundred cheering supporters in a campaign-style event before flying off for the last time in Air Force One en route to his Florida resort.

“We will be back in some form,” vowed Trump, who retains a hold on much of the Republican Party despite being the first president to be impeached twice.

Trump did not address Biden by name but, in a rare hint of graciousness, wished the next administration “great luck and great success.”

A spokesman said Trump maintained one tradition by leaving a letter for Biden, although the contents were unknown.

Mike Pence, the outgoing vice president who clashed with Trump in his final days by acknowledging he could not overturn the election, was attending the inauguration alongside former presidents Obama, George W. Bush and Bill Clinton and their wives — including Hillary Clinton, for whom Biden's victory was especially sweet four years after her narrow, surprise defeat to Trump.

Last-minute Trump pardons
In one of his last acts before departing the White House, Trump issued scores of pardons to people convicted of crimes or facing charges, including several key allies.

Influential former Trump aide Steve Bannon — charged with defrauding people over funds raised to build the Mexico border wall, a flagship Trump policy — was among 73 people on a list released by the White House.

Trump also at the last minute ended a ban on his administration's officials serving as lobbyists — an order he had issued with fanfare at the start of his presidency as he vowed to “drain the swamp” of Washington.

However, neither Trump nor his relatives enjoyed pardons, amid speculation he could use the legally dubious tactic of a preemptive pardon to fend off future charges.

Trump will still be in focus at the Capitol as the Senate considers convicting him after he was impeached for inciting the mob earlier this month.

The spectacle will clash with the opening days of Biden's tenure, as the new president seeks to swiftly confirm his Cabinet picks and push through ambitious legislation — including a $1.9 trillion rescue package.