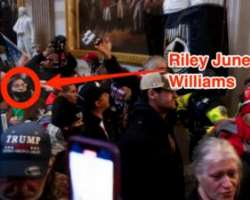 The Department of Justice has publicly charged around 100 people with crimes related to the Capitol riot earlier this year, with more certain to come.

The insurrectionists, seeking to stop Congress’s vote count confirming President-elect Joe Biden as the winner of the 2020 election, stormed in, broke windows, and trashed Congressional offices.

And one of them stole a laptop belonging to the most powerful woman in the history of the United States.

Read more: ‘It was degrading’: Black Capitol custodial staff talk about what it felt like to clean up the mess left by violent pro-Trump white supremacists

In footage captured by ITV News , Williams appeared to be one of the rioters guiding others further into the Capitol building and toward Pelosi’s chambers, raising questions about how much planning she put into the events of January 6.

After initially fleeing, Williams was arrested Monday morning . It’s still not clear what she’s done in the two weeks between the alleged laptop theft and her arrest.

Here’s what we know about Williams, how she got Pelosi’s laptop, and exactly how the Russians fit into all of this. So, who is this woman?

Williams was singled out in a segment from ITV News, a British news organization , as someone who stood out during the Capitol insurrection. She wore a long brown coat and a bright green shirt “with an alt-right slogan.”

Unlike most of the insurrectionists milling about, Williams appeared to have a mission. She pushed other rioters in one direction, yelling “Upstairs, upstairs, upstairs!” according to the ITV footage. The FBI used footage from ITV News to identify Riley Williams in the Capitol Building. The footage shows her telling people to go upstairs, where Pelosi’s office is located. Department of Justice

ITV News later interviewed William’s mother in Harrisburg, Pennsylvania, who said her daughter wasn’t home. She said Williams had become involved in “far-right message boards” and frequently attended “rallies” about “wanting America to get the correct information.” ITV also displayed a photo of her holding a military rifle while wearing a face mask bearing a skull illustration.

According to the FBI affidavit filed in court as part of the charges against Williams , her mother told Harrisburg police officers her daughter had left home and said she would “be gone for a couple of weeks” without saying where she would be going.

Jonathan Lund, the FBI agent who wrote the affidavit, said Williams had deleted her Facebook, Instagram, Twitter, Reddit, Telegram, and Parler accounts following the insurrection. How did she know how to get Pelosi’s laptop?

The degree to which Riley planned her incursion into the Capitol building remains unclear.

According to the FBI affidavit and ITV News video footage, Williams appears to have breached the Capitol building with a crowd and went to its southern wing, where the House of Representatives does its work.

She traveled through Statuary Hall to the Small House Rotunda (close to the Capitol Crypt) where she then brought a crowd up a flight of stairs and to Pelosi’s office, the ITV footage and FBI affidavit shows.

Other footage of Williams shows her carrying a zebra print bag with something inside that’s roughly the size of a laptop. You can see her at around the 10-second mark in the video below:

Another video, apparently from Snapchat, shows someone with a brown sleeve grabbing an HP laptop from the Capitol building. A screenshot is included in an updated FBI affidavit with the caption “they got the laptop.”

Pelosi’s deputy chief of staff, Drew Hammill, said the laptop was “used only for presentations.”

It’s not clear what files were on the laptop, whether it has network access that allows it to access other files in Pelosi’s office, and what steps have been taken to secure it. A representative for Pelosi didn’t immediately respond to Insider’s request for comment. How did the FBI find her? Riley June Williams in a booking photograph obtained from the Dauphin County Prison in Harrisburg, Pennsylvania, U.S. January 19, 2021. Dauphin County Prison/Handout via Reuters

Footage of Williams first circulated broadly in an ITV News segment that aired on January 12 . According to the FBI affidavit, a “former romantic partner” of Williams made several phone calls to the FBI’s tip line for the Capitol riot after watching the segment and said their ex was there.

FBI agents then matched up the person in the footage with Williams’s Pennsylvania divers license photograph and confirmed they were the same person. Harrisburg police officers also confirmed with Williams’s mother that she was at the Capitol during the attack. Are the Russians involved?

Williams’s ex who called the FBI also said Williams had a plan to send the laptop to a friend in Russia, who then planned to sell it to the SVR – the Russian equivalent of the CIA.

The ex also said the transfer “fell through for unknown reasons” and that Williams “still has the computer device or destroyed it,” according to the FBI affidavit. Speaker of the House Nancy Pelosi. Tom Williams/CQ-Roll Call via Getty Images

The affidavit says the matter remains under investigation.

Williams appeared in a hearing Tuesday afternoon in a court in Dauphin County, which includes Harrisburg. She was charged with theft of government property and obstruction, which carry sentences that can total up to 20 years .