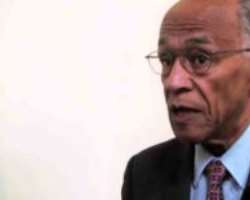 Kamala Harris has spoken openly and frequently about her heritage. Being the daughter of two immigrants has affected her perspective of the world, her personal life (including her oft-mispronounced name, which means “lotus” in Sanskrit), and her stance on many issues. An important piece of her backstory is Kamala’s father, Donald Harris, a former economics professor at Stanford and an immigrant from Jamaica, who has…thoughts about some things Kamala has said. He lives close to Kamala, and recent reports claim they’re on “good terms,” but she’s made comments that suggest that she was closer to her late mother. It sounds like they have an important, but complicated relationship, so here’s what we know about it.

Donald Harris was born in Jamaica.
According to his Stanford bio , Donald is a naturalized U.S. citizen (which unfortunately sparked bogus, and racist, claims that Kamala isn’t eligible to run for office). Donald attended the University of California Berkeley and worked at the University of Wisconsin (Madison) before coming to California. He’s traveled extensively, and has spoken often about the economic situation in his home nation of Jamaica and how to improve the economy there and in other developing nations.

In fact, during his time at Stanford, he acted as economic consultant to the Jamaican government and advisor to various prime ministers there. Renee Anne Shirley, former advisor to the Jamaican prime minister, said, “In three years, he got tenure—think about it, a Black man—and then he left and went to go to Stanford? He is a big thing for us…He pushed the boundaries. He was way ahead of his time.” He was a prominent professor at Stanford.

According to his bio, Donald joined the faculty at Stanford in 1972. His focus has been “exploring the analytical conception of the process of capital accumulation and its implications for a theory of growth of the economy, with the aim of providing thereby an explanation of the intrinsic character of growth as a process of uneven development.”

According to The Oprah Magazine , he taught undergraduate classes such as “Theory of Capitalist Development” and graduate students in a program named, “Alternative Approaches to Economic Analysis.” He was deemed a “Marxist” scholar by The Stanford Daily , indicating that “there was some opposition to granting him tenure because he was ‘too charismatic, a pied piper leading students astray from neo-Classical economics.'” Nevertheless, he was the first Black person to receive tenure in Stanford's economics department, and people who knew him say they can see his tenacity and spirited argumentation in his daughter’s political debates. He also was apparently a strong mentor to students and knew quite a bit about Howard University, which Kamala attended.

He’s now been retired since 1998, and holds the title of emeritus professor. He now works on “developing public policies to promote economic growth and advance social equity.” He was divorced from Kamala’s mother.

Kamala’s mother, Shyamala Gopalan, passed away in 2009 of colon cancer. She and Donald separated when Kamala was five and divorced when she was seven. Donald immigrated to the U.S. to go to school at Berkeley and met Gopalan there.

The pair crossed paths when Gopalan met Donald at one of his off-campus meetings in 1962 that discussed the parallels between Jamaica and the U.S. After the meeting was over, Gopalan was interested in his ideas. She went up to him to introduce herself. He recalled her to T he New York Times , “a standout in appearance relative to everybody else in the group of both men and women.”

Despite growing up on opposites sides of the world, the ideas Donald presented intrigued Gopalan. “This was all very interesting to me, and, I daresay, a bit charming,” he recalled in the interview. “At a subsequent meeting, we talked again, and at the one after that. The rest is now history.” They were married in 1963.

Funny enough, Gopalan didn’t plan on staying past her college years. “I came to study at UC Berkeley,” she said to SF Weekly . “I never came to stay. It’s the old story: I fell in love with a guy, we got married, pretty soon kids came.” Kamala was born in 1964, and her sister came two years later.

According to Harris’ autobiography, The Truths We Hold , their marriage and decision to stay in the U.S. “were the ultimate acts of self-determination and love.” Her first exposure to protests and demonstrations was apparently a “stroller's-eye view.”

In a 2018 essay written by Donald , he discussed the divorce, saying it “came to an abrupt halt in 1972” after losing a “hard-fought custody battle in the family court of Oakland, California.” He explained that despite the divorce, his love for his family never faltered. “Nevertheless, I persisted, never giving up on my love for my children or reneging on my responsibilities as their father.”

In The Truths We Hold, Harris spoke about her parents’ relationship, writing, “had they been a little older, a little more emotionally mature, maybe the marriage could have survived. But they were so young. My father was my mother's first boyfriend.” The friction in the family was a source of worry for her, including when she invited both parents to her high school graduation, “even though I knew they wouldn't speak to each other.”

Gopalan’s brother told The New York Times: “She was quite unhappy about the separation but she had already got used to that and she didn’t want to talk to Don after that. When you love somebody, then love turns into very hard bitterness, you don’t even want to talk to them.”

Initially, the family lived in California; Kamala talked about being bussed to school in California in the first Democratic debate. According to the San Francisco Chronicle , she was “part of the second class to integrate Berkeley's classrooms when she began school in 1969.” The project achieved national recognition for its efficacy at the time. Kamala moved away at 12 years old when her mother got a research job in Canada.

In an essay for Jamaica Global Online , Donald wrote about his daughters experiencing their heritage. He said, “One of the most vivid and fondest memories I have of that early period with my children is of the visit we made in 1970 to Orange Hill,” he wrote. “We trudged through the cow dung and rusted iron gates, up-hill and down-hill, along narrow unkempt paths, to the very end of the family property, all in my eagerness to show to the girls the terrain over which I had wandered daily for hours as a boy.”

He continued writing: “Upon reaching the top of a little hill that opened much of that terrain to our full view, Kamala, ever the adventurous and assertive one, suddenly broke from the pack, leaving behind Maya the more cautious one, and took off like a gazelle in Serengeti, leaping over rocks and shrubs and fallen branches, in utter joy and unleashed curiosity, to explore that same enticing terrain. I quickly followed her with my trusted Canon Super Eight movie camera to record the moment (in my usual role as cameraman for every occasion). I couldn't help thinking there and then: What a moment of exciting rediscovery being handed over from one generation to another!” He was critical of one of Kamala’s jokes on the campaign.

At one point while she was on tour, Kamala was asked whether she smoked pot when she was young (which I think is a ridiculous question, TBH, but whatever). She said, “Half my family's from Jamaica, are you kidding me?”

Her father sent a comment to a Jamaican publication, saying , “My dear departed grandmothers (whose extraordinary legacy I described in a recent essay on this website), as well as my deceased parents, must be turning in their grave right now to see their family's name, reputation and proud Jamaican identity being connected, in any way, jokingly or not with the fraudulent stereotype of a pot-smoking joy seeker and in the pursuit of identity politics.”

“Speaking for myself and my immediate Jamaican family, we wish to categorically dissociate ourselves from this travesty,” he added. (A travesty?? Wow.) Kamala’s campaign, no surprise, had no comment. When emailed by Politico for further comment, Donald said, “I have decided to stay out of all the political hullabaloo by not engaging in any interviews with the media.” The post has now been deleted.

So, that happened! Even though no one in the family’s given an update (or said anything on the matter), it sounds like the relationship has always been complex. Kamala hasn’t said much about her dad recently.

On the campaign trail and thereafter, Kamala often spoken about her mom. “I'm the daughter of a mother who broke down all kinds of barriers. Shyamala Harris was no more than five feet tall, but if you ever met her you would think she was seven feet tall. She had such spirit and tenacity and I'm thankful every day to have been raised by her,” she wrote on Mother’s Day , and she talked about her mother’s influence on her even more recently than that:

Even though there are pictures of him in the above slideshow, Kamala doesn’t speak much about Donald. According to a Washington Post article, friends of the family have said Kamala and Donald’s relationship has been “strained” at times, though they’re now on “good terms.” “But at 82, he has little desire for the attention or celebrity that comes with his daughter's ascent,” writes reporter Robert Samuels. A New York Times article noted that in her acceptance speech for the VP nomination, in which she thanked almost her entire family, Donald was absent.