Trump won't hand off the nuclear football to Biden 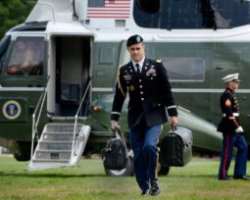 When he is sworn in Wednesday, President-elect Joe Biden will get the nuclear “football” — an oddly shaped 45-pound briefcase that is always at the president’s side to command and control the country’s massive nuclear arsenal.

A military aide carrying the “football” remains physically close to the president, ready to carry out the well-rehearsed choreography of command and control.

Smithsonian Magazine reported that is it officially called the “president’s emergency satchel,” and it is built around a “sturdy aluminum frame, encased in black leather.” But, the magazine noted, unlike in the movies, it does not have a big red button to launch a nuclear war.

However, for the first time, the outgoing president, Donald Trump, will not hand off the black leather case to the incoming president. Typically, the handoff takes place at the inauguration ceremony at the U.S. Capitol.

Because Trump plans to be in Florida when Biden is sworn in, the handoff will happen differently. It will be the first time in the nuclear age that a sitting president has not attended his successor’s inauguration .

A U.S. official said that a military aide will accompany Trump to Florida with one of the footballs and that Trump will retain sole authority to launch a nuclear strike until 11:59:59 a.m. Wednesday. Trump’s being physically out of Washington will not affect his launch authority or access to the football until noon. (There are multiple footballs that allow a president to launch a military strike while traveling.)

The football for Biden will be on hand for him at noon Wednesday. Image: The nuclear football (Olivier Douliery / AFP – Getty Images file)

Retired Navy Adm. James Stavridis, an NBC News contributor, said that at noon, the football with Biden will become the one that is “activated,” in the sense that U.S. Strategic Command would go to that one if something happened that meant it was needed.

“Right before he becomes president, there’s a football in his vicinity [that] is activated,” Stavridis said of Biden.

The White House declined to comment, saying it is a security matter.

In a 2013 documentary by the Discovery Channel, former Vice President Dick Cheney describes the moment as it typically unfolds.

“The passing of the football occurs at high noon. Nobody says a word, but I knew what to look for,” he said. “So you’ve got the ceremony going down front, but … sort of behind one of the big pillars there in the front, these two guys are standing there in their uniform, and at the right moment he reaches over to hand it to the newly designated military aide. And he takes it from that moment on. The new president is the guy who’s in control of our nuclear assets.”

There have been some unusual events surrounding the football under the different presidents, said presidential historian Michael Beschloss, an NBC News contributor.

The location of football “was an issue when JFK assassinated was in Dallas,” he said. “Reagan’s nuclear code card was accidentally thrown out at the hospital after he was shot in 1981. Clinton lost his nuclear code card for a few months in 2000.”