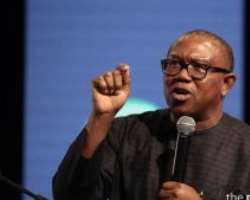 North Elders Forum (NEF), Afenifere, the Catholic Bishop of Sokoto Diocese, Matthew Kukah and the former governor of Anambra State, Mr Peter Obi; on Thursday warned that Nigeria was repeating its mistakes that led to the civil war which lasted from July 6, 1967 to January 15, 1970.

Speaking at a webinar, they cautioned that unless something urgent was done, the aftermath of the ongoing injustice, poor governance and leadership failure in the country would be worse than what was experienced during the civil war.

The civil war was fought between the government of Nigeria, headed by the then Head of State, General Yakubu Gowon (retd.), and the secessionist state of Biafra, led by the late Lt. Col. Odumegwu Ojukwu, from July 6, 1967 to January 15, 1970, during which over one million persons reportedly lost their lives.

The online conference with the theme, 'The 2nd Never Again Conference: 51 years after the Nigerian-Biafran civil war,' was hosted by Nzuko Umunna, an Igbo Think Tank, in partnership with Ovation International and Njenje Media, while a prominent economist, Prof Pat Utomi, was the chairman, planning committee.

In his brief remarks, Obi said, “We are still travelling on the same road to the same destination. The road has got more bumpy, worse than it was than when they (Nigerians) travelled that road before. If you compare what is happening today and what happened then, what brought Nigeria to that destination in the past has actually got worse today.

“All of those things that made them to participate in what happened are still very much today and getting worse, starting from incompetent leadership with total lack of capacity and character.

You have a situation where corruption is worse today that it was then. Unemployment is far worse today when you have millions of young people in their productive age not knowing where the next meal would come from and the government is not thinking.”

Obi said the elite had to come together and see how to pull the country out of the current mess or the situation would consume everyone, as he likened the current leadership challenge in the country to using Molue (rickety big yellow buses in Lagos now phased out) drivers in Formula 1, a motor racing world championship.

He added, “We cannot continue with the way we are today; across the entire country, from local government to the highest level, we have incompetent leadership and they don't have the capacity to solve the country's problem. You don't go to a Formula 1 competition with a Molue driver.

“These vehicles of the Nigerian state are being driven by Molue drivers across the country and that is why you have too many accidents. We need to have the proper people who are competent and can do the job. If you don't have it, you have a problem.”

Kukah, who was the keynote speaker, explained that Nigeria had yet to learn any lesson from the civil war, adding that the frustration and feeling of injustice by a section of the country after the war were still rife till today despite Gowon's 'No victor, no vanquished' statement.

He stated, “I was told of a late general who said were the civil war to occur again, he would fight on the other side. There is a lot of resentment, anxiety and frustration and the feeling is that we have not learnt any lesson.

“About 51 years after the war, we still hear the kind of agitation that ordinarily with good governance, honesty, commitment, devotion, dedication, focus and right leadership; we should have put behind us. Unfortunately, these anxieties are still with us.”

Similarly, the spokesperson for the NEF, Dr Hakeem Baba-Ahmed, said at the webinar that unless something dramatic was done, things would get worse. He lamented that the post-civil war elite had substantially killed the country even more than those who launched the country into the “disaster” that ended in 1970.

According, Nigeria has a very poor leadership that doesn't care about Nigerians. He stated, “You have massive insecurity; no fresh ideas; you have leadership that is more interested in having power than governance.”

Talking about the possibility of another civil war, he stated, “We need to recognise that when we say never again, it can still happen again. Let's not deceive ourselves, it can happen again. In fact, (something) worse can happen.”

At the conference, Afenifere leader, Chief Ayo Adebanjo, said the problem of the country was the constitution, adding that the injustice in the system had been fuelled by the President, whom he said ensured that northerners dominate key institutions in the country at the detriment of other regions..

He stated, “I don't want this country to break; I have contributed to the unity of this country before Buhari was born. Since 1950s we have been talking of a balanced constitution. In 1979, I spent one year in Maiduguri, campaigning for the UPN so we could have a united country. I was already a lawyer and there was peace in the western region so I didn't have to go there, but we wanted the country to be together. So, when we talk about a united country, many of them have not contributed half of what some of us have.

“If today, they agree to restructure the country back to true federalism, there will be no agitation from any quarter, because all the problems we are having now are the products of the imposed constitution. Let us face it.”

Also speaking, an elder statesman Yakasai, who commended the organisers of the event, said he had never been a believer in the “destruction” of Nigeria. “This is a democracy in which the views of the majority would always prevail while the minorities have a right to say whatever they want to say,” he added.

Also speaking, the leader of the proscribed Indigenous People of Biafra, Nnamdi Kanu, said the elite had failed the country, adding that it was ironical to have elite in a society that has no potable water for its people, no good roads, good schools and criminals were busy killing people. “Elite for what and what have they accomplished? Absolutely nothing,” he added. – Punch