Chelsea legend Drogba announces separation from wife after 20 years together 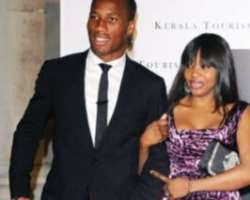 The pair married on June 12, 2011 in Monaco in the presence of selected guests, but player claims they have separated after 20 years of togetherness.

Although he did not explain reasons for their separation, the two-time Africa Player of the Year Award recipient however noted that it was a difficult decision.

He however stated that their three children will get maximum protection, adding that the privacy of the family will remain protected. Jubilation as former Chelsea star who won Champions League title welcomes baby

He wrote:
“I am not used to discussing my private life, but due to speculation in the media today, I will confirm that unfortunately after 20 years together Lalla and I have made the difficult decision to go our separate ways. Last year.

“We remain very close and our main goal has been our children and to protect them and the privacy of the family.”

From the union between Didier and Lalla – were born three children: Isaac, Iman and Kieran.

Only recently, Drogba was presented with a traditional chieftaincy title in a village in his home country.

This traditional title was bestowed upon the Premier League icon by the founder of the village Nanan Kouakou Kouao the Patient III.

It was gathered that the former Ivory Coast captain was enthroned in the pure Akan tradition and received the attributes of a chief. Drama as top Nigerian player declared missing since late last year, club raises alarm

The former Blues goal poacher is currently in Niable with his foundation as part of a social work marked by the delivery of digital libraries and school kits to local schools on December 16, 2020.

However, Legit.ng earlier reported that former Chelsea star Salomon Kalou has taken to social media to announce the arrival of his baby girl with his partner Karina Ferreira.

The 35-year-old who currently plays for Brazilian club side Botafogo posted the feet of the newborn on his official Instagram page.

The post has generated so much engagement with one of his former bosses among the first set of people to congratulate the player.