Coup in America: Why Trump Must Be Impeached Again 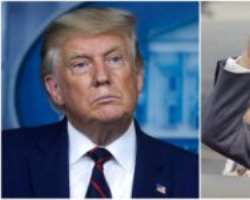 In the book, Effective Leadership Formula, I compared the leadership patterns in the United States of America and that of the Federal Republic of Nigeria and concluded that a major distinction is the approach to democratic freedom. “On the one hand, even as the USA is far from perfect, the country has sustained measurable control mechanisms to minimize chances of negative freedom. This approach has helped to stabilize leadership in the American environment over time. On the other hand, Nigeria has elevated the freedom in her new democratic experience to negative proportions, where it appears that there are no consequences for bad behavior in the country.Any nation where anything goes, goes nowhere.”

The American democracy has seen a sea of negative freedomsince the era of Trumpism. Like Nigeria, there appears to be no consequences for bad behavior in the United States of America in recent times. The problem heightened once Donald J. Trump began his presidential journey, as he continues to saddle the polity with poisonous conspiracy theories, naked lies, race-baiting, divisive politics, and other manners of immoral and criminal behaviors.

The most startling was when he declared in middle of the 2016 presidential campaign that he could commit murder and go scot-free. “I could stand in the middle of Fifth Avenue and shoot somebody, and I wouldn't lose any voters, okay?”

Trump continued to spew many of such horrifying expressions. Though they are definitively disqualifying for a candidate running for the presidency of a country that prides itself on moral leadership, Trump saw no reason to cease. There were no consequences for his actions, as the American media looked the other way.

The apparent lack of accountability prompted me to publish the piece: “Trump: How the Weird Can Win the US Presidential Poll”, accurately predicting that the Republican was coasting to victory, because “the almighty media have gone gung-ho with the Trump mania, which is understandable because of the entertainment value.” I concluded that it was naïve to assume that his “radical style will not continue to gain currency moving forward. The American media have a way of elevating eccentric behaviors to a pop culture.”

It did not come as a surprise, therefore, that none of Trump’s behaviors, no matter how unpresidential, could stick, as the bozo marched on to victory. His supporters did not seem to care that Trump broke with tradition by refusing to release his income tax statement. Many Americans did not care to rebuke Trump when he began to peddle the falsehood that there was “large scale voter fraud happening on and before election day” of 2016, once he noticed the polls showing him trailing in the battleground states. It did not matter that over 25 women accused him of sexual misconduct, some of which were captured on tape.

Yet, Mr. Trump neither apologized nor showed any sense of compunction for his moral turpitude.

Before the media could realize their failure to hold him accountable, the damage was already done. Mr. Trump had already tapped into a visceral anger provoked by 9/11, decades of job flights, as well as gay marriage controversies, to hoodwink millions of gullible voters, most of who were Americans without college education, promising them heaven and earth, claiming who he is not, and eventually lying himself all the way to the White House.

To make matters worse, Trump assumed office at a time his party was in control of both chambers of the American Legislature. The result was little or no checks and balances. He quickly seized the control of the entire Republican party with authoritarian gusto, dictating who won or who lost the primary elections in his party. And the party members not only feared Trump, they also enabled him. In short, any dissent was viewed as a capital crime.

The growing lack of consequences for bad behavior in the country explains why the Republican-controlled Senate declined to remove President Trump from office after a he was impeached by the House of Representatives for soliciting foreign interference to help him win the 2020 U.S. presidential election. It also accounts for why Trump would undermine the American democracy once again by fabricating the pretext that the 2020 presidential election was rigged to favor his opponent and rightful winner, Joseph R. Biden. The same negative freedom is why the narcissistic president would lie about COVI919 and exacerbated the spread of the virus for selfish political interest.

The most tragic is that every Trump behavior, no matter how insane, had become the new norm, and many of his party members are competing to become the heir apparent to immoral kingdom. Therefore, none of his actions should have come as a surprise.

But there comes a time nonsense paves way to commonsense. President Donald J. Trump is a pathological liar, truly “deranged, unhinged, dangerous”, and has exhibited the worst example of democratic power. Trump’s attempted coup on January 6, 2021, where he incited armed insurgents to take over U.S. Congress in order to overturn free and fair presidential election of 2020 is the most dangerous threat to the concept of democracy. The consequence must not be business as usual.

The posterity calls on the Unites States to protect democracy and “Make America Great Again” by impeaching Donald Trump once again. Though the clown has less than two weeks in office, his impeachment and banishment from future elective office will deter his apologists, as well as other dictators around the world from contemplating any trumpish behavior. Moreover, having reigned as the temple of modern democracy, America must save the system of government by demonstrating serious consequences for those who desecrate it.