Pope expands women's roles in Church, but draws a line at priesthood 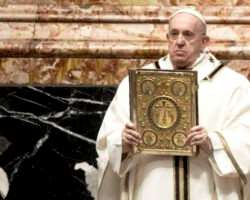 Rome — In the United States and in much of the Western world, it’s customary for women to read the Gospel, serve at the altar or distribute communion during Catholic mass. On Monday, Pope Francis changed Vatican law to institutionalize this practice — up until now authorized at the discretion of the local bishop — throughout the Catholic Church.

By explicitly allowing women to serve as Lecters and Acolyte during liturgical celebrations, the Pope has essentially eliminated an individual bishop’s power to block the participation of women at the altar. Francis stressed, however, that these ministries were “essentially distinct” from the holy orders of deacon and priest.

With his Monday apostolic document, called a “Motu Proprio,” Francis changed a 1972 canon law written by Pope Paul VI that decreed the ministries of Lectern and Acolyte could only be held by men, because they were considered preparatory to admission to the priesthood.

Pope appoints 6 women to senior Vatican roles
Francis underscored that the development in no way opens a door to allow women to be ordained as priests.

“The Church does not have the faculty in any way to confer priestly ordination on women,” he said in a letter explaining the Motu Proprio. “For non-ordained ministries it is possible, and today appears opportune, to go beyond that reservation.”

“This decision ensures that women have a real and effective impact on the organization, in the most important decisions, and in the leadership of communities but without ceasing to do so in the style of their feminine imprint,” the Pope said.

The Pope said he made the changes after receiving recommendations in 2019 during a meeting of bishops from the Amazonian region. They urged the pontiff to allow greater participation by lay women to help tackle the problem of a shortage of priests.

“I am going to take up the challenge … that you have put forward, that women be heard,” Francis said to the gathered bishops at the close of the meeting.

The bishops also asked Francis to consider allowing married men to be priests, but he declined to make that change early in 2020.

House to vote on measure aimed at ousting Trump from office