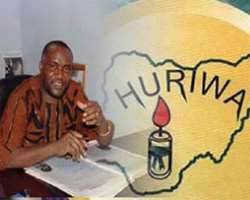 In a letter dated January 5th 2021 and submitted same date to the EU office in Abuja Nigeria, the Rights group said the civilised world should bar members of the 9th Session of Nigeria's National Assembly from travelling to Europe should the proposed bill to grant voting rights to UNDERAGE GIRLS MARRIED TO ADULTS be passed into law which the Rights Advocacy group HUMAN RIGHTS WRITERS ASSOCIATION OF NIGERIA (HURIWA) interpreted to mean an indirect legalization of PAEDOPHILIA in Nigeria which the European Court of Human Rights had outlawed.

Specifically, in the letter endorsed by the National Coordinator Comrade Emmanuel Onwubiko, the Rights group said the following:

"We bring to you and your good offices our message of our best wishes.

We are writing you this letter to quickly call your attention as a bloc of civilised nations of a very disturbing political development in Nigeria.

Sir/ Madam, it is our belief that because of the profound pride of place that the European Union occupies in the globe, it will be right to write you this letter and to plead with you to very rapidly investigate the alleged existence of a ring of paedophiles in the Nigerian National Assembly in Abuja which recently came to the open. With a sinister bill of proposed law to allow for under age married girls in Nigeria to be allowed to vote even when the Nigerian constitution is explicit that only those that have reached the age of universal adult suffer age of 18 that are entitled to vote.

We have carried out our own investigations, and from what we are told by those who should know the 9th session of Nigeria’s National Assembly is populated by some characters who may be paedophiles.

We believe that the proposed bill to allow for underage girls who are married, which ab initio is a crime under the Nigerian law, to now be clothed with the electoral right to vote or be voted for, is another way of introducing paedophilia into Nigeria from the back doors.

*the national assembly joint committee on the Independent National Electoral Commission (INEC) is recommending that married underage girls be recognised as eligible voters.

Nigeria’s constitution currently pegs the eligible age for voting at 18.

The national assembly joint panel made the recommendation to a technical committee which will work on the new electoral act proposed by the federal lawmakers.

The technical committee is made up of lawyers, lawmakers, INEC officials and civil society organisations (CSOs).

At a public hearing organised by the joint panel about two weeks ago, some stakeholders recommended that married underage girls should be considered as voters.

Speaking at the inauguration of the technical committee in Abuja, Kabiru Gaya, chairman of the senate committee on INEC, said the recommendation is a unanimous decision by the joint panel.

“The joint committee has proposed that if a lady who is not up to 18 years is married, she should be considered to be mature enough and be eligible to vote,” Gaya said.

But Mahmood Yakubu, INEC chairman, said the issue of voting age is a constitutional matter, adding that the law also recognises 18 as marriageable age.

In response, Aisha Dukku, chairperson of the house of representatives committee on INEC, said the recommendation cannot be thrown out because it was suggested by stakeholders at the public hearing.

“It is already in the electoral act amendments submitted in the last assembly, so it cannot be thrown away just like that,” the chairperson said.

“We should look at it and come up with something instead of throwing it away. It is not from us but from the stakeholders on the day of the public hearing held in the 8th assembly.”

Thereafter, Yakubu said INEC would work with the federal lawmakers to amend the country’s electoral act before the first quarter of 2021.

Electronic voting will be backed up by law if the national assembly passes this amendment and the president assents to it.

Sir, we are very afraid that should this bad piece of legislation be passed, it will therefore legalized paedophilia and as you know it, the legislators in Abuja are the best paid elected parliamentarians in the world even when Nigeria is one of the poorest Nations in the world.

Sir/Madam, it is good to let you know that the members of the Nigeria’s National Assembly often travel to all over the world and Europe is their preferred choice. Will it be right to allow paedophilesto travel to your nations? We urge you to take steps to impose a travel ban should they make good this plot to legalize paedophilia.

We humbly wish to remind your good self that the European court of Human Rights has on many occasions issued verdicts that makes paedophilia a crime.

For instance, the “child sexual abuse and child pornography in the court’s case- law”, published on the website of www.echr.coe.int, the European court of Human Rights made the following findings:

The Court has found a positive duty on the part of the Contracting states to protect their inhabitants in a range of cases. In such cases, the state is not the primary violator of rights (i.e. it is not the state that beats, rapes, enslaves etc.), but rather the state has inadequate structures in place to prevent these kinds of abuse. This can mean that the state does not provide adequate criminal sanctions for actions that violate Convention rights. States may also be compelled to provide regulations and policies that effectively deter and prevent abuse. Finally, in some cases the Court finds that individual state officials knew or should have known of specific instances of abuse (or risk of abuse) and failed to stop their continuation. When viewed in conjunction with Article 1, which provides that states shall “secure to everyone within their jurisdiction the rights and freedoms [of the Convention]”, this positive duty to protect has been imposed in cases involving children (at least) under Articles 2, 3 (to be addressed below), 4 and 8.

In Article 2 cases the Court has held that the state has a duty to protect its inhabitants’ right to life. These cases include Kontrová v. Slovakia, no. 7510/04, 31 May 2007, and Opuz v. Turkey, no. 33401/02, 9 June 2009. In those cases, the Court articulated a standard of repeated warning. In other words, state officials knew of the risk facing the victims in these cases and failed to act adequately. The Court will likely not find a violation where there is no evidence that the state knew or should have known of the risk. In Kontrova, for example, the Court held that Article 2 “involves a primary duty on the State to secure the right to life by putting in place effective criminal-law provisions to deter the commission of offences against the person backed up by law-enforcement machinery for the prevention, suppression and punishment of breaches of such provisions. It also extends in appropriate circumstances to a positive obligation on the authorities to take preventive operational measures to protect an individual whose life is at risk from the criminal acts of another individual” (§ 49). In Ivison v. the United Kingdom (dec.), no. 39030/97, 16 April 2002, however, the Court found that there was no evidence that the police should have known that the victim was in danger and thus there was no Article 2 violation.

Article 4 case-law also imposes an affirmative duty on states to prevent the exploitation of individuals through forced labour. In Siliadin v. France, no. 73316/01, 26 July 2005, the Court found that “the applicant, who was subjected to treatment contrary to Article 4 and held in servitude, was not able to see those responsible for the wrongdoing convicted under the criminal law” (§ 145). Therefore, the Court held that states have an affirmative duty to provide criminal sanctions for people engaged in slavery. In these contexts, the state’s responsibility to protect children is particularly strong. Both Kontrová and Siliadin concern failure to protect minors.

In the context of immigration policy, the state’s duty is even stronger given the increased state involvement. The Court has held under Article 3 that in cases where children are held in detention facilities for the purpose of deportation, the state holds a high duty of care (regarding, inter alia, the child’s physical and mental health).1 In Mubilanzila Mayeka v. Belgium, no. 13178/03, 12 October 2006, the Court noted and condemned the “legal void” for the protection of minors held in detention centres (§ 56). It found that the lack of care given to an unaccompanied five-year-old violated her Article 3 rights. Further, the Court held in Maslov v. Austria, no. 1638/03, 23 June 2008, that expulsion measures taken against”

It is therefore our prayer to urge you to impose travel bans to members of the 9th session of the National Assembly should the law relating to paedophilia which is the move to allow for underage married girls to vote, is passed into law.

HURIWA’S OBJECTIVE ARE;
1. To deploy the members’ creative talents as writers to promote, protect and project the human rights of all Nigerians and other law abiding citizens resident within Nigeria;

2. To organize periodic seminars and training workshops locally for human capital development specifically on the tenets and ideals of Human Rights and the rule of Law;

3. To attend international workshops and seminars targeted at the promotion and protection of human rights;

5. To highlight human rights challenges confronting the persons in conflict with the law and seek for constructive modalities for redressing such violations; and

6. To recognize excellence and good governance standards in the polity through yearly award ceremonies for exceptionally good, tested and trusted leaders in both the corporate and public sectors. The process of selection would be transparent mass participation strategies.

Accept our highest regards and consideration even as we look forward to hearing from you."