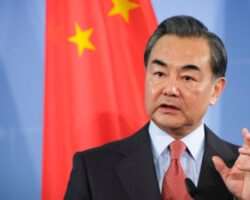 By Ifeanyi Nwoko
Chinese State Councillor and Foreign Minister Wang Yi has cautioned Chinese companies operating in Nigeria to strictly obey the labour laws of the country as well as local customs.

Wang who is in Nigeria on a working visit gave the directive on Tuesday in Abuja while responding to questions from newsmen shortly after a closed-door meeting with Nigeria's Foreign Minister Geoffery Onyeama.

Wang who was responding to questions about alleged mistreatment of Nigerian workers by some Chinese companies said that the government of China would not tolerate such issues if they occur.

He noted that most of the Chinese companies in Nigeria were obeying the laws of the land, pointing out that if there were exceptions, there were established diplomatic channels to address such issues.

“We make this clear to each and every Chinese company doing business in Nigeria, Nigerian laws must be strictly abided by, local customs shall be respected.

“We believe most of the Chinese companies here are doing well in this regard but there can be a few exceptions because of this or that kind of reasons they might have some labour issues.

“This is not something the Chinese government wants to see and whenever such issues occur we have diplomatic channels to communicate to make sure that the situation is properly handled to protect the legitimate rights and interests of Nigerian workers,” he said.

On the visit, Wang said that Nigeria in the first on the list of five countries including Democratic Republic of Congo, Botswana, Tanzania and Seychelles, which he would be visiting.

He said that the message which he is taking with him is that of strong commitment of China to work with African Countries to build a closer community with a shared future.

“China firmly supports Africa's fight against COVID-19, when China was hit by the coronavirus, we received firm support from our African brothers and such support we always cherish.

“On our part, China has contributed supplies to 53 African countries and the African Union, for some of them, this has helped met their immediate needs.

“China remains a developing country, China's cooperation with Nigeria is South South cooperation. What makes this different from North South Cooperation is that the former is all about mutual help and support between friends,” he said.

He assured that China's relationship with Nigeria was neither political not a show of economic power but was based on the needs of Nigeria as dictated by the bilateral consultations between both countries.

“China sees to it that we do not interfere in Nigeria's internal affairs.

“We have helped build a number of railways, highways and other projects, we believe this has contributed to Nigeria's economic growth. Next step we will encourage more Chinese investment in Nigeria, with more investments, more jobs will be created,” he said. (NAN)