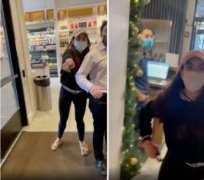 Nina Golgowsk i
A woman accused of assaulting the 14-year-old Black son of prominent jazz musician Keyon Harrold after she  falsely accused him of stealing  her cellphone has reportedly claimed that she was, in fact, the one assaulted and that a viral video of Saturday's incident doesn't portray her accurately.

“That's not who I am,” the 22-year-old  told CNN  on the condition of anonymity due to safety concerns. “I actually … try very hard to make sure that I am always doing the right thing.”

The woman was inside New York's Arlo SoHo hotel in lower Manhattan when she thought that someone had stolen her cellphone. She told CNN that she demanded to see the hotel's surveillance video and then asked someone else in the lobby to “empty their pocket” before confronting Harrold's son, who she said had an iPhone in his back pocket.

“That's when everything got a bit more serious,” the woman said.

Video taken by Harrold and posted to social media shows the woman, who appears to be white, repeatedly lunging at his son while trying to take his iPhone. The woman calls for help from a hotel manager, who, over Harrold's objection, asks to see the boy's phone.

“You don't have to explain nothing to her,” Harrold tells his son as the frenzied woman demands that the boy's phone case be removed and the phone given to her.

Harrold, later speaking with The New York Times, said that his phone's video cut off just as the woman tackled his son and tried to search his pockets. Harrold can be heard saying, “Get your hands off,” immediately before the video ends.

At some point after the confrontation, Harrold said, an Uber driver showed up with the woman's missing phone.

In her retelling of the events to CNN, the woman said that she was the one assaulted in the hotel's lobby. She reportedly agreed to provide evidence that might confirm her assault allegation but then stopped responding to the news outlet's phone calls and text messages.

The New York Police Department on Tuesday said that after reviewing video of the incident, it plans to bring charges against the woman. Those charges may include assault, grand larceny or attempted robbery.

“Our perpetrator initially started a verbal argument of this accusation and then tried to attack our teenager by grabbing for his phone, grabbing his leg and trying to tackle him. Our victim didn't suffer any injuries. But his father, who he was with, received slight injuries,” Chief of Detectives Rodney Harrison said at a press briefing.

An NYPD spokesperson later told NBC New York that the department has identified the woman but at the time had not yet interviewed her. Though Harrold and others have suggested that the incident involved racial profiling, the spokesperson said police are not investigating it as a bias attack.

Love HuffPost? Become a founding member of HuffPost Plus today.

This article originally appeared on HuffPost and has been updated.