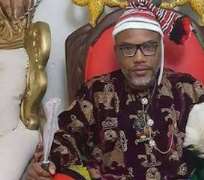 The Indigenous People of Biafra (IPOB) on Sunday warned South-East governors not to work against its newly launched security outfit; the Eastern Security Network (ESN).

It accused the governors of a motive to incite the army and others against ESN.

The group in a statement by IPOB’s Media and Publicity Secretary, Emma Powerful, warned the governors to desist from such act or be prepared to face catastrophic consequences resulting therefrom.

The secessionist group also warned local vigilantes in the zone set up by state governors not to allow themselves to be used to carry out what it called evil agenda or have themselves to blame.

It said both the governors and community leaders would be held responsible for any form of attack on any of its security personnel.

IPOB advised the Nigerian Army and other security agencies to stop dissipating energy towards stopping ESN, but rather channel their strength against Boko Haram, bandits and terrorists rampaging the North.

The pro-Biafran group maintained that ESN was not a Biafran Army but a vigilante group set up to defend the people of the old Eastern region against terrorists and criminals responsible for the growing insecurity in the region.

The statement partly read, “The game plan is to orchestrate crisis between the vigilante groups and ESN to pave the way for Nigeria soldiers to attack ESN personnel.

“We, therefore, wish to warn all local vigilantes in every state of Biafra who have been or may be contacted or are being recruited by the masterminds of this evil agenda through the traditional rulers and President General of any community or town in Biafraland to attack ESN operatives to have a rethink. Embarking on such unholy mission is suicidal.

“Anyone, vigilante group, community, traditional ruler or President General, political elite or anybody under any guise who will connive with the enemy to expose or attack ESN in their locality will live in eternal regret of such satanic mission. It’s not a threat but a promise.

“We want to make it clear that leaders of any community in Biafra land where any ESN personnel is attacked will pay dearly for such attack.”

The statement added, “We specifically warn Governor Dave Umahi of Ebonyi State not to push us any further against the wall. He cannot sacrifice Biafran freedom on the altar of his imaginary presidential ambition. Umahi must retrace his steps now and not test our resolve to protect our land.”

When contacted, the Anambra State Commissioner of Police, John Abang, said he would not want to speak on the matter.