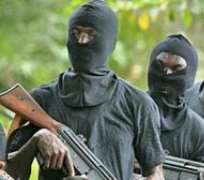 Kidnappers in Edo struck again Tuesday when they hijacked a commercial bus with passengers.

The ‎gunmen were said to have attacked the Abuja-bound commercial bus owned by Big Joe Transport Line, traveling from Benin between Ehor and Iruekpen.

Several of the passengers, according to eyewitnesses, were forcefully taken into the bush‎ by their abductors.

He explained that from the report received, the hoodlums were repelled by policemen who were stationed at a checkpoint near where the incident occurred.

According to him, on approaching the bus, the police discovered that three of the passengers could not be accounted for.

He maintained that no death was recorded in the attack, adding that efforts were ongoing to locate the three missing passengers.

Today's unfortunate incident in the state adds to the worsening insecurity across Nigeria.

Several cases of kidnapping have been reported in the last few weeks along the road and many parts of the nation.

The rate of kidnapping and robbery along the road, which leads to Abuja, has remained unabated.

Flashpoints for robbery and kidnapping on the axis over the years are Urhokosa, Obagie, Ogbemudia Farm, Agbede, Aviele, and the boundary between Edo and Kogi states at Okepella.