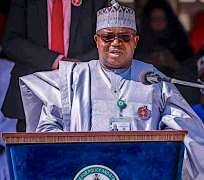 He died in Abuja today after a brief illness, according to a Facebook announcement by alumni of Zang Secondary Commercial School, which he attended.

The cause of death was not stated.
President Muhammadu Buhari has expressed sadness over the death, describing Galadima as an intellectual colossus who stood tall in the field of scholarship and knowledge.

He commiserated with his family, friends, the government and people of Nasarawa State.

President Buhari added that “with the death of Galadima, NIPPS and Nigeria at large has lost one of the best DGs ever appointed to head the institute.”

Until his appointment as DG of the prestigious institute by President Buhari, Galadima was a professor of political science and taught for many years at University of Jos.

His area of specialisation was International Relations and Strategic Studies. He joined UNIJOS in 1990 as Assistant Lecturer.

He joined NIPSS in 2012 as the Director of Research and the Chief Operating Officer of the Political Parties Leadership and Policy Development Centre of the National Institute.

He was also Head, Department of Defence and Security of the Directorate of Research, National Institute for Policy and Strategic Studies (2012).

Before then, he was Assistant Director, Defence and Security Studies, Institute for Peace and Conflict Resolution, the Presidency, Abuja (2004).

He was Research Fellow with the National Council on Intergovernmental Relations, Abuja (1993).

Galadima was born in 1963 in Toto Local Government of Nasarawa State.

He then proceeded to the University of Jos, where in 1987 he obtained a degree in Political Science. In search of further specialisation in International Relations and Strategic Studies, he pursued postgraduate training in his Alma Mata, earning the MSc degree in 1990 and PhD in 2006.