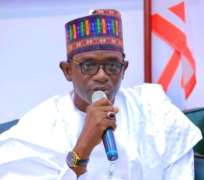 As part of efforts towards promoting economic activities and recovery drive after years of destruction by insurgents, Yobe State Governor Hon. Mai Mala Buni has flagged-off the construction of 40 kilometre Gujba-Mutai road project at the cost of N6, 397, 939, 331.22.

Flagging off the project he said, the 40 kilometres Gujba-Mutai road, which will be executed under the Multi-Sectoral Crisis Recovery Project (MCRP), would be completed within the next12 months.

The governor also said that the construction of the road was part of fulfillment of an electioneering campaign to the people taking into cognizance the economic importance of the project to the people.

“The poor state of the road over the years, had militated against exploiting the huge agricultural and economic potentials in this area. Therefore, the reconstruction of this road will no doubt increase the volume of trade in Mutai and Ngalda weekly markets, stimulate more economic growth, improve revenue generation and boost employment opportunities.

“I am also optimistic that the road will attract business and investment opportunities from within and the neighboring states in view of the rich potentials endowed in this area. This project is a reflection of our collective drive to post-insurgency resettlement, rehabilitation and reconstruction efforts,” Buni emphasized.

Buni further explained that though the project is supposed to be Gujba-Ngada covering about over 90km said arrangements are on top gear for the completion of Mutai-Ngalda by the Northeast Development Commission soon.

“I am glad to inform you that there is also a commitment by the North East Development Commission (NEDC) to reconstruct the Mutai-Ngalda sector of the road.

"This will give the entire Gujba-Ngalda road a complete facelift to facilitate easy movement of goods and services in these areas," Buni said.

The Project Coordinator of the MCRP in Yobe State Alhaji Musa Idi Jidawa said the project was part of the recovery effort in restoring basic infrastructure for communities severely affected by insurgency.

“It is gratifying to note that the Gujba-Ngalda road is an important road that links the three-insurgency most affected local government areas of Gujba, Gulani and fika with an estimated combined population of 559, 169 (2016 census) who are mainly agrarian.”