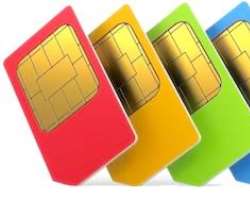 The National Identity Management Commission (NIMC) Thursday said that there is no cause for panic regarding the two weeks deadline for deactivation of Subscribers Identity Module (SIM) cards that are not linked with users’ National Identity Number (NIN).

The Commission explained that adequate arrangements have been made to capture the data of 200 million Nigerians within the next five years.

It added that the steps taken so far to ensure that all subscribers have NIN in their SIM cards are meant to address the security challenges facing the country.

The commission also said the telecommunication operators would be involved in the exercise .

Adegoke said the initiative was aimed at addressing the bottlenecks associated with the capturing of citizens data by NIMC.

He added that the method would increase the enrolment centres from the current 1000 to 10000 across the country.

He said the NIMC is desirous of scaling up its assignment to regulatory functions after the completion of the exercise.

Adegoke however explained in a statement that the licensed agents were approved after successfully fulfilling all the conditions in the advertised Expression of Interest (EOI) which was done in 2019 as a first step towards the take off the National Digital Identity Ecosystem project.