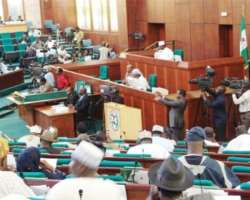 
ABUJA, July 04, (THEWILL) -The ongoing legal tussle by four eminent Nigerians against legislators’ jumbo pay at the Federal High Court sitting in Abuja has attracted prominent lawyers and Civil Society Organizations (CSOs), to the effect that they want to join the fight both as plaintiffs and counsels to plaintiffs respectively, THEWILL can report authoritatively.

Chief Winston Odumu-Ojobi, Deputy National Chairman (North) of the United Nigerian Peoples Party (UNPP) and spokesperson of the plaintiffs in the case told THEWILL in Abuja that Constitutional Lawyer and Activist, Femi Falana, amongst other lawyers have indicated interest to be their counsel without pay, adding that about six (6) CSOs also showed solidarity and want to join the fray. The Other plaintiffs are: Agbo Gilbert Major, Alhaji Yahaya Ndu,ã€€and Dajuma Mohammed.

The development is coming on the heels of moves by the National Assembly members to put up strong defense in the case to water down the seeming corruptive tendencies that had enveloped both the upper and lower chambers in a bid to cover up their "real pay" that has gone beyond the recommended pay by the Revenue Mobilization Allocation and Fiscal Commission (RMAFC).

According to the remuneration package released in 2009 by RMAFC, each of the 107 senators besides the Senate President and his Deputy will receive N11 million in basic salaries and regular allowances every year while a member of the House of Representatives will get N9.9 million.

Previously, a senator was getting N17 million while a House member earned N14.99 million.

The new agitation by the lawmakers, according to Chief Odumu-Ojobi for an upward review of allowances is not in line with the remuneration package prepared by RMAFC.

THEWILL learnt that already, members of the Senate have started mobilizing their colleagues to arm twist the Senate leadership. Investigation so far reveal that quarterly allocation to each member of the House of Representatives has increased from about N25 million to the neighborhood of N40 million in the last three years while those of the senate have remained between N35 million to N45 million within the same period.

In the suit No. FHC/ABJ/CS/480/ 2009 instituted in August last year, the plaintiffs are praying the court to order that the salaries, allowances and other remunerations of federal lawmakers, including the amount of money spent so far on constituency projects should be published in national newspapers for public scrutiny.

The plaintiffsã€€ã€€ through their counsel Barrister Lloyd Duruã€€averred that the defendants are government agencies and public officials with various responsibilities for managing Federal Government Revenue and taming corruption and other forms of public breach of trust under the various statutes governing them adding that the direct effect of the secrecy on the lawmakers remuneration on the plaintiffs include the inability of the Federal Government over a period of ten years to tackle power supply problems, fuel scarcity and maintenance of refineries; reconstruction of old roads or building new ones; equipping hospitals and building new clinics; funding education and educational institutions.

"Monies paid to the National Assembly members over the past seven years have been over an average of N40 billion per annum. This figure is a colossal amount considering that the National Assembly members consist of only 469 legislators. This N40 billion is about the budget of some state governments in the Federal Republic of Nigeria. The legislators have been draining the revenue of the Federal Government for personal enrichment under various expenditure items in addition to salaries and entitlements," according to the statement of claims.

Continuing, the plaintiffs further claimed that the "legislators are among the richest individuals in Nigeria building and living in expensive houses; driving posh cars; buying and setting up lucrative businesses all to the detriment of the plaintiffs. As a result of this economic drain and wrongful enrichment, the plaintiffs have been deprived of the benefits of government services as enumerated above particularly health services, security and other public infrastructure. The figure spent on legislators over the past seven years alone is N280 billion. This represents a colossal drain on the coffers of government and extent of wrongful enrichment."

They urged the court to compel the defendants to disclose the extent of payments made so far to the legislators to enable law enforcement agencies begin investigations into wrongful and unjust enrichment by the legislators wherever applicable.

"It is necessary to compel the defendants to disclose the officially approved entitlements of the legislators to ensure control of public funds," the petitioners claimed adding that "despite repeated demands by journalists in the print and electronic media, members of the legislature have refused, neglected or failed to make public all payments received by each member of the National Assembly under any guise whether as salaries, allowances, constituency projects, monetization for transport and housing, protocol and security from May 29, 2007 to July 31, 2009."

"The Plaintiffs’ claim against the defendants jointly, severally or in the alternative as follows: An order of this Honourable Court compelling the defendants to publish in all electronic and print media in Nigeria all entitlements for each member of the National Assembly under all heads no matter how named or described including official and personal entitlements such as salaries, allowances, constituency projects, monetisation for transport, housing, protocol and security.

"An order of this Honourable Court compelling the defendants to publish in all electronic and print media in Nigeria all payments received by each member of the National Assembly under any guise whether as salaries, allowances, constituency projects, monetization for transport, housing, protocol and security from May 29, 2007 to July 31, 2009.

"An order of this Honorable Court compelling the Chairman, Economic and Financial Crimes Commission (EFCC) and the Chairman, Independent Corrupt Practices and other related Offences Commission (ICPC) to investigate all payments received by each member of the National Assembly for constituency projects as well as the current state, location and actual amount on such projects and the mode through which the contracts were awarded for such projects from May 29, 2007 to July 31, 2009 and publish same in print and electronic media.

The petitioners want the anti-graft agencies to find out if due process was followed in the award of the contracts for federal lawmakers’ constituency projects throughout the federation.

It was also their prayer that "an order of the honorable court compelling the Chairman, Code of Conduct Bureau to publish in all print and electronic media all declarations made by each member of the National Assembly prior to their assumption of duty as Public Officers (Senators and Members of the House of Representatives of the Federal Republic of Nigeria) to ascertain what they have acquired since assuming office. Thereã€€should also be an order of this Honorable Court restraining the defendants, their agents, privies and associates from harassing, intimidating or threatening the plaintiffs and their counsel."

Although the eleven defendants in the case have entered mandatory appearances in the matter through their various counsels, the case has continued to endure another adjournment as defendants argued that the plaintiffs have "suffered no wrong or harm over and above other Nigerian citizens" by non-disclosure or publication of remuneration record of the federal lawmakers.