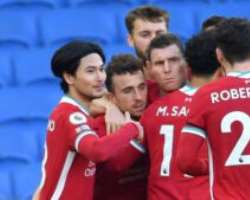 With the game at 1-0 heading into stoppage time, Andrew Robertson was adjudged to have kicked the foot of Danny Welbeck in the box, and after going over to the pitchside monitor, referee Stuart Attwell awarded the spot-kick, despatched down the middle by Gross.

Brighton had already missed a first-half penalty – Neal Maupay struck a penalty wide after Neco Williams had brought down Aaron Connolly (20) – before Diogo Jota looked to have given Liverpool the victory, dancing past two challenges before finding the bottom corner (60), his eighth strike in eight Liverpool games.

The result means Liverpool return to the top of the Premier League for 24 hours at least, one point ahead of Tottenham and three ahead of Chelsea who face off on Super Sunday. Brighton sit 16th with 10 points from 10 games. How Brighton grabbed point in eventful clash

Liverpool started with energy, but Brighton’s game plan soon came into action as a simple long ball over the box caught out the Reds’ high defensive line. Maupay’s through ball found Connolly through on goal, but despite having time to compose himself, he poked wide of Alisson’s left-hand post.

Jurgen Klopp’s unfamiliar starting XI included right-back Williams, starting his first Premier League game of the season, and the youngster was at fault as Brighton were then awarded a spot-kick.

Initially losing out in a duel with Yves Bissouma, Williams was then drawn into fouling Connolly on the left of the box, with Attwell pointing to the spot. His blushes were spared, however, as Maupay struck wide from 12 yards, and to make things worse, was then subbed off with a hamstring injury.

Liverpool showed how they can punish teams in an instant as Roberto Firmino’s wonderful touch and volleyed ball over the top for Mohamed Salah found the Egyptian through on goal, and he did the rest by pushing the ball past the onrushing Mat Ryan. However, VAR found that Salah’s foot was inches ahead of Brighton defender Ben White’s.

Jordan Henderson was introduced for Williams in the second half as Liverpool started to click, and they got their opener 15 minutes after the restart. Robertson found space on the left to fizz a ball square into Salah, who touched it off for Jota, and the forward brilliantly skipped two challenges on the edge, waiting for his opportunity to stick the ball in the bottom left corner.

For all the talk of clubs wanting a return of five substitutions, two early second-half changes were met with frustration – Brighton’s Connolly and Liverpool’s Salah looked irate at coming off – but subsequent injuries to Adam Lallana and then James Milner went some way to strengthening calls.

Brighton began to commit and nearly levelled as Solly March’s dangerous cross was nearly turned into his own net by Robertson, but after Sadio Mane’s headed goal was ruled out by VAR for offside, Robertson was in the spotlight in stoppage time as Brighton got their goal.

A seemingly innocuous kick from the Scot on Welbeck in the penalty area initially went unnoticed, but as VAR intervened, Attwell reversed his decision at the pitchside monitor, much to the annoyance of Robertson and Klopp.

What the managers said
Brighton boss Graham Potter: “It wasn’t the most stonewall penalty I’ve seen, I will say, but sometimes you get them, sometimes you don’t. It’s a beautiful part of football and we’ll always be debating referee and linesman decisions, and you need the margins to go your way in the Premier League.

They clearly went our way today, but I thought our performance level was really good, and we deserved something from the game in terms of how we played.”

Liverpool boss Jurgen Klopp: “My analyst told me Mo was offside, very close, small margin, his toe or whatever. Mane was offside with his upper body, I didn’t see it, but sounds like it. So both close.

“Second penalty is a penalty because the ref whistled it. There was contact, and if the ref thinks it’s enough, we cannot change it in that situation.”

On five subs debate: “If it was about me, I wouldn’t have mentioned it, but it’s about players. It would be good for the players. Brighton lose today two players with muscle injuries, and they play once a week. For Sheffield United as well by the way, we will see. I can explain it one last time, in this period we are in, five subs is not for tactical changes.

“If ever one coach has the luck to change it for tactical changes, that will be the exception. It’s just today, we made an early sub at half-time, and then a second sub, and then we thought if we are brave to make a third sub, if you are not brave you wait to make the third sub.

“If we would have had five subs, then Andy Robertson I would have taken off, we had Kostas on the bench. It’s not the solution, but it’s a little help. Whatever Chris Wilder says, I don’t speak only about Liverpool. He speaks only about Sheffield United, that’s true and he admitted that, but I speak about football players.” Opta stats

What’s next?
Liverpool now host Ajax in the Champions League on Tuesday evening at 8pm, before hosting Wolves at 7.15pm on Sunday night in the Premier League.