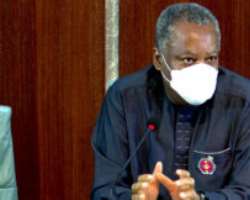 The Nigerian government has reacted to the deliberations on the recent #EndSARS protest by the United Kingdom parliament.

It stated that while debates on all matters were allowed, the UK parliament does not speak for the British government.

The Minister of Foreign Affairs, Mr Geoffrey Onyeama, made the position of the Federal Government known while addressing reporters on Wednesday in Abuja, the nation's capital.

According to him, the Nigerian Government is in communication with the United Kingdom and has informed the British authorities of its side of the situation, especially as it relates to the shooting at the Lekki tollgate in Lagos.

“On the issue of the UK parliament, yes, we have reached out to the UK government on this question.

He added, “So we are in touch with them and engaging with them but, of course, as in any democracy, the members of parliament are able to also air their views but what is important is that a balanced picture is made available to them all before they take any decision.”

The minister briefed State House correspondents at the end of the 25th virtual meeting of the Federal Executive Council chaired by President Muhammadu Buhari at the Presidential Villa.

He also noted that he had recently paid a visit to his home state, Enugu, on the instruction of the President to engage with the youths and leaders on the #EndSARS protests.

The minister revealed that governors of the South East were already reaching out to their contemporaries across the country to ensure that the lives and properties of the people of the region were protected during any crisis.

He added that the leaders have given an assurance that they would do the same for non-indigenes in the South East.

Onyeama made the remarks in reaction to the call by UK parliamentarians for sanction against Nigerian authorities and security agencies over human rights abuses and extrajudicial killings during the #EndSARS protests which held in October in various parts of Nigeria.

On Monday, a member of the UK parliament, Theresa Villers, informed the lawmakers that about 220,330 people had signed an e-petition and they have a credible case.

Members of the parliament had asked the UK government to consider imposing sanctions on Nigerian officials found culpable of human rights abuses during the demonstrations. (Channels TV)