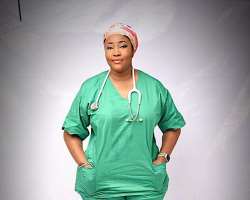 The controversial Lagos plastic surgeon, Anuoluwapo Adepoju, has been indefinitely suspended by the Medical and Dental Council of Nigeria (MDCN).

Her suspension followed the death of her patient, Nneka Onwuzuligbo. MDCN took the interim disciplinary action against Adepoju, owner of Med-Contour, on Monday, pending the determination of her case with its disciplinary tribunal.

The plastic surgeon, who prides herself as a ‘body contour specialist’, operated on Onwuzuligbo, at a medical facility on December 31, 2018.

The news of her patient’s death first went viral in February 2019. Adepoju is also being investigated over suspicion of illegal activities and alleged evasion from an investigation into the failed plastic surgery.

Adepoju’s practice had attracted several complaints from her clients, leading to an investigation by the Federal Competition and Consumer Protection Commission (FCCPC).

One of the complainants was Omotola Taiwo popularly known as @Omohtee12, who said she almost died after surgery done by Adepoju.

According to the FCCPC, there was sufficient probable cause to inquire into the consumer protection aspects of the representations and services of Med Contour and its operatives.