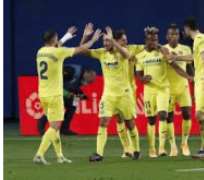 Real Madrid missed the chance to move within a point of La Liga leaders Real Sociedad as they were held to a draw by Villarreal.

However, the visitors struggled to put the game out of reach and visibly tired as the game wore on.

Instead, Villarreal got stronger and were awarded a penalty late on when Samuel Chukwueze was brought down and Gerard Moreno slotted in the spot-kick.

Moreno had a good chance to secure all three points for Villarreal and send Unai Emery's side top of the table but he hesitated when well-placed to shoot and Raphael Varane got the block in.

In end it was a good point for Real Madrid, who were missing a number of first-team players through injury, and they stay fourth in the table behind Villarreal in second. (BBC)