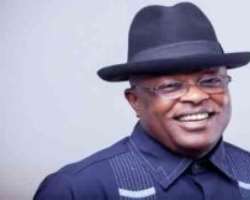 Governor Dave Umahi of Ebonyi State has reacted to his rumoured 2023 presidential ambition saying his future is in the hands of God.

The governor who spoke during an interview on Channels Television's Politics Today on Friday said contrary to speculations that he was nursing the ambition of succeeding President Muhammadu Buhari in 2023, he planned to quit politics by then.

“My future is in the hands of God. I have told God I want to leave politics in 2023 and because my life is owned by him, I need his permission on anything that is called future this,” Umahi said.

When asked for the difference in political ideology between the ruling All Progressives Congress (APC) and the opposition Peoples Democratic Party (PDP), the governor believes it is too early to determine that.

The governor who described himself as a brand new baby in the party said he needs to learn how to walk and run before determining the political-ideological differences between the two parties.

“I have not studied the manifesto of the APC. I am just a brand new child, I should be pampered very well I this APC.

“I will have to learn how to walk, run before I can answer the question about the ideologies of the APC,” he added.

Wike who spoke in Port Harcourt on November 17 said Governor Umahi left the PDP because he wants to be the presidential candidate of the All Progressives Congress (APC) in 2023 and not injustice meted on the South East by the opposition party, as claimed.

Governor Wike stated that committed members of the PDP were not surprised that the Ebonyi governor formally defected to the APC on Tuesday, which he had been fraternising with for a while. (Channels TV)