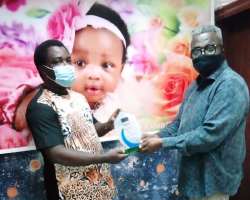 The Nordica Media Merit Awards have announced the winners of its 5th edition of the journalism awards for the year 2020.

*Odimegwu Onwumere* of *The Nigeria Voice* won with his article in the Online Category, without a match.

In the same Print Category, Dayo Ojerinde of Punch Newspaper came as 2nd Runner Up.

The Electronic category went to Oluwayemisi Adesanya of EbonyLife.

The awards presentation on Nov. 20 by 11am, was held at Nordica Fertility Center, Ikoyi, Lagos, in a low key, due to the Cornavirus observations.

Only the winners were allowed to attend the awards presentation while informed society participated in the ceremony via zoom.

However, the winners had been notified of their win since June 11, waiting for the pandemic to go down, in a mail sent by Mr. Chukwudi Eze of the fertility centre.

Meanwhile, in October, *Onwumere* won the "Stay at Home" journalism awards hosted by Merck Foundation, Germany. He also won the inaugural Nordica Media Merit Awards in 2016, in its Online Category, and has won numerous journalism awards, including Finalists.

*Written by Amadi Njoku, who was live in Lagos.*