Digging Their Own Grave; The End Days of Ethiopia’s TPLF Regime 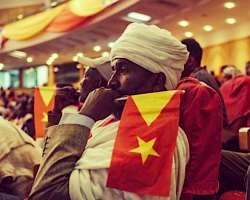 Prevously in power for almost three decades the Tigray Peoples Liberation Front (TPLF) of Ethiopia finally is approaching their end days and as we say here in the Horn of Africa, “they are digging their own grave”.

The TPLF has been Africa’s if not the worlds most corrupt, brutal, genocidal even, regime for the past 30 years. Removed from national power in Ethiopia during the peaceful revolution there in 2018, the peace deal the USA brokered left them holding out in their home province of Tigray, one of Ethiopia’s smallest minorities. Providing refuge to wanted criminals and then sending their paid agents to commit murder and ethnic mayhem across Ethiopia these past two years, the TPLF has done its best to bring havoc to the country, in other words, “digging their own grave”. The hatred felt throughout Ethiopia, if the opinions being voiced in a half a dozen languages via satellite television is anything to guide us by, putting these gangster in their grave once and for all it long over due. The Ethiopian Parliament voted unanimously to authorize doing so, with all the many ethnic based factions united in this.

While the world was distracted with the elections in the USA, the TPFL launched an attack on an Ethiopian Defense Forces logistics base in Tigray, apparently hoping to capture weapons. The attack failed but Ethiopian blood was shed and lives were lost by a regime that claims to be their fellow Ethiopians. The brutality the TPLF gun thugs exhibited towards the captured Ethiopian army personel shocked all of Ethiopia, with those refusing to join the TPLF shot down in cold blood and the rest stripped naked and forced to walk barefoot across the Eritrean border. Reports of hyenas eating the bodies of Ethiopian troops sickened the country even more.

This literally was the straw that broke the camels back and Nobel Peace Laureate P.M. Abiy Ahmed picked up the gauntlet the TPLF mafia threw at the feet of the Ethiopian people and declared war, something all to over due for most of the country.

Abey had been patient, almost painfully so, when the TPLF assasinated senior ethnic Amhara generals in 2019, trying to provoke ethnic warfare. Then when they instigated the assassination of the popular Oromo singer and youth leader early in 2020 and sent their paid agents to burn, loot and murder afterwards, Abey bided his time, all the while tightening the noose around the TPLF bandits.

With the pressure increasing daily and their own people increasingly restive, the TPLF held another of their “100%” elections, awarding themselves every single seat in their so called Tigray assembly recently.

Abey has been one step ahead of them since before their ouster from national power in 2018 and in a.series of moves that foretold what lay in store, Abey, in a dramatic strike kept completely secret until it was implemented, ordered the replacement of the Ethiopian currency, the Birrh. With only 90 days to exchange their literally billions of birrh, with no possible explanation of how they aquired it, the TPLF found themselves facing bankruptcy, unable to pay their security forces and maintain control of the TIgrayan people.

Then Abey went to Sudan and arranged the security of the Sudanese border, what is really the border between Ethiopia and Sudan, so as to close the back door of escape. Increasingly hemmed in by their traditional enemies the Afar to the south and the Amhara to their west, with the Eritrean border to their east heavily militarized and impenetrable, their only escapte route was through Sudan, traditonally a pourous, easily corrupted border. WIth the new government in Sudan

allied with the Ethiopian government of Abiy and now close to Eritrea again, the TPLF capos and their henchmen are now effectively trapped.

The TPLF have been threatening to launch an all out war against the government of Abiy Ahmed for months now, growing more shrill and alarmist by the week. Then they did it, attacked the armed forces in their base and the die was cast, no going back. P.M. Abiy has taken up the challenge and has begun to mobilize the Ethiopian army to put a long overdue end to as murderous lot of gangsters as you will find anywhere.

Before this the TPLF response to the steadily growing pressure from all sides has been to try and further enflame ethnic hatred through assassins for hire attacking Oromos in particular, blaming Abiy Ahmed all the while. They have made desperate appeals to their erstwhile supporters in the EU, UN and AU as well as the human rights mob such as the International Crisis Group (funded by the National Endowment for Democracy/CIA and George Soros) and the usual suspects ie Amnesty International and Human Rights Watch.

To hear die hard criminals claiming to being persecuted and treated oh so unfairly would be amusing if the TPLF were not so dangerous. A cornered hyena is the most dangerous sort all, too willing to attack anything and everything it can reach.

Then on the night of November 9th, as the advancing Ethiopian army gathered at their doorstep at a town in west Tigray, the retreating TPLF death squads began their bloodthirsty work, literally butchering with machetes and knives some 500 seasonal workers at their domitories.

Amnesty International reported that survivors of this shocking massacre pointed the finger of blame squarely at the TPLF killers. At first the western media tried to spread the blame, or at least to confuse just who was to blame, but Amnesty’s report this time played it straight, and the whole world can see once again just what a inhuman, barbaric lot of murderers the TPLF really are.

This wasnt the first time, no, no, no, the TPLF has a long bloody history of massacres. When they invaded Eritrea in 2000, something new P.M. Abiy has apologized for, pretty much any civilians they could catch were butchered. Eritreans are all to familiar with their Tigrayan neighbors and knew to flee with only the clothes on their backs, children in hand, 1.5 million of us, when the TPLF broke through Eritrean defenses.

In the early 2000’s the Anuak people of Gambella, home to 2 billion barrels of oil or more and some of the richest agricultural lands in Ethiopia, were targetted for a massive wave of ethnic cleansing including a series of bloody massacres by TPLF death squads.

At the end of 2006 the TPLF sent it’s army into Somalia at the behest of their overlords in Washington D.C. and during their two year occupation slaughtered over 50,000 Somalis.

In 2007 they responded to an attack by ethnic Somali fighters in the Ogaden region of Ethiopia to mount a complete food and medical aid blockade that lasted until the peaceful revolution of 2018. While drought, famine and even at least two cholera outbreaks (how could cholera have entered the Ogaden when there was such a draconian blockade?) the TPLF sent the “wheat militia” death squads rampaging across the Ogaden.

The TPLF has instigated inumerable massacres where their agents flamed ethnic tensions into conflaguration, with hundreds at a time slaughtered and over 1 million Ethiopians internally displaced, refugees in their own country.

As the Ethiopian army advances on three fronts towards the TPLF capital in Mekele, the cornered hyenas of the TPLF have become ever more dangerous, or at least trying to be. While their own “army” conscripts put up their hands in surrender in front of the advancing Ethiopian government troops the TPLF launched rockets into Eritrea, with three landing in a cow pasture on the edge of the capital Asmara. They then announed that they were officially at war with Eritrea who has carefully refrained from putting boots on the ground in Ethiopia.

Ethiopia has a large modern army with over 20 advanced Russian fighter bombers while the TPLF lost all of their airforce in 2018, taken from them by the new government of Abiy Ahmed. There is simply no way their gun thugs known as the “Agazi”, with their white helmets, alongside miscellanous death squads can fight a conventional war with the

Ethiopian government.
In typical bandit style, the retreating TPLF has begun taking hostages, starting with Ethiopians working for the UN aid agencies. Their last stand will be in their capital Mekele in their south and dont be suprised if they prevent the civilian population from fleeing, using them as human shields to slow the Ethiopian army down and limit the use of the airforce.

The military end of the TPLF is not far off, days rather than weeks, but once the fighting ends the real hard work begins. The TPLF regime has been in power almost 30 years in Tigray and they have their enforcers in every village in the province. Truth and Justice committees will have to be implemented in every village, bringing to justice all those who committed crimes against the Tigrayan people while under TPLF protection.

As with all weeds if you just cut off their heads, and the Ethiopian government has issued wanted posters for 68 of the top TPLF capos, the weeds will only grow back in time. You have to pull weeds up by the roots, TPLF roots, from deep within Tigrays villages, and this will take enormous energy and resolute, uncorruptable leadership. P.M. Abiy Ahmed has his job cut out for him for years to come though the benefits of a finally peaceful Ethiopia will be welcomed across the

country.
There is joke making the rounds of Asmara that goes like this; “Do you know Abiy Ahmed’s fathers real name?”. Many Asmarinos know it to be Ahmed Ali? No is the answer, Abiy Ahmeds father’s real name is “Wedi Afom”, Eritrean President Issais Aferwerki’s nickname. In other words, the over 50 years of hard won wisdom of Issias Aferwerki is guiding Ethiopia’s leadership, something P.M. Abiy acknowledged openly back in July 8, 2018 when he said, and I quote “dont worry Issias if leading us”.

Now that the TPLF “has dug its own grave” and is about to be buried once and for all, the benefits for the rest of the Horn of Africa and east Africa as well will bring a blossoming of peace and properity, a prosperity based on mutual cooperation for our regions good, and to hell with the western banksters and multinational blood suckers. The death of the TPLF will deprive the CIA, whose agents groomed and fed the TPLF mafia from its earliest days of its largest, longest lived and most sucessfull project in Africa in the past 40 years.

Thomas C. Mountain is an historian and educator living and reporting from Eritrea since 2006. Reach him at thomascmountain at g mail dot com.