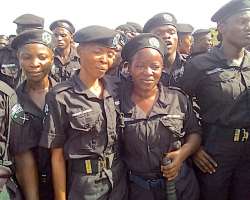 The Special constabulary Unit of The Nigeria Police Force has become a reality. The passing-out parade of the unit was conducted across the federation on Friday.

The special constables are to anchor and coordinate the much-talked about community policing duties.

In Ogun State, about 320 new officers were said to have been trained at the Police Training School, Iperu.

The Commandant of the training school, Abdulsalam Razaq, said the new intakes were indigenes of the 20 local governments in Ogun.

According to him, they would be deployed to their various local governments to assist the police in modern policing and to stem the spate of crimes in their communities.

Rasaq disclosed that the special constables have been well trained on how best to perform police duties, intelligence gathering and respect for human rights.

In his words, the parade reviewing officer, Inspector General of Police, Mohammed Adamu, urged the newly recruited officers to make good use of the trainings they have received some far.

Adamu, who was represented by the Ogun State Commissioner of Police, Edward Ajogun, appealed to the special constables to perform their duties diligently with internal best practices.

He told them to respect the human rights, saying whoever engaged in any unprofessional conduct would be shown the way out.