Nigeria In A Joe Biden's Presidency 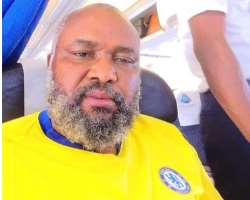 The November 3rd 2020 tumultuous Presidential election in the United States of American (USA) is about to come to an end with the increasing likelihood that before this piece is published, Mr. Joe Biden of Democratic Party could emerge as the 46th President of the world’s strongest democracy.

In the likelihood that Mr. Joe Biden becomes the president of the United States of America,

What are the possible pains and gains that Nigeria and Africa stand to derive for the next four years going by the inevitable reality that America matters in world’s affairs just as it is a notorious factor that whenever the United States of America sneezes, the rest of the world catches cold. Nigeria particularly has experimented with Constitutional democracy patterned after the United States Presidential System. It is therefore of significance for a Nigerian to want to formulate an agenda for any new American President.

Before proceeding, the preliminary assertion is to say that it is heart warming to begin by saying that it is not out of place for Nigerians and Africans to heave a sigh of relief with the emergence of a man who chose someone with some historical ties to Africa as his Vice President.

Senator Kamala Harris, the California senator of Indian Jamaican heritage is a former Attorney General who is keen on achieving holistic police reform amid Nationwide anti- racism protests is set to become the first black woman and south Asian American to ascend to the prestigious position of vice president of the United States which was the same position Joe Biden occupied for eight years under Barack Obama who ironically became the first ever black American President of the United States of America. The presence of someone of significant African heritage is a string reassurance that Africa will matter in the affairs of the Presidency of Senator Joe Biden.

However, the place to begin is to embark on just a little exploration into the life and times of Joe Biden as this would give us a clearer picture of what his foreign policy direction would be towards Africa.

Reading ab entry from www.biography.com revealed to us that long before reaching one of the highest political offices in the nation, Biden — born on November 20, 1942 — grew up in the blue-collar city of Scranton in northeast Pennsylvania.

Biden credits his parents with instilling in him toughness, hard work and perseverance. He has recalled his father frequently saying, "Champ, the measure of a man is not how often he is knocked down, but how quickly he gets up." He's also said that when he would come home sullen because he had been bullied by one of the bigger kids in the neighbourhood, his mother would tell him, "bloody their nose so you can walk down the street the next day!'"

Biden attended St. Paul's Elementary School in Scranton. In 1955, when he was 13 years old, the family moved to Mayfield, Delaware—a rapidly growing middle-class community sustained primarily by the nearby DuPont chemical company.

Interestingly, the biographer says that as a child, Biden struggled with a stutter, and kids called him "Dash" and "Joe Impedimenta" to mock him. Even during these campaigns, his rival Donald Trump always mocked him as the 'sleeping Joe'.

The good thing about Joe Biden as a kid was that he eventually overcame his speech impediment by memorizing long passages of poetry and reciting them out loud in front of the mirror.

Reportedly, Biden attended the St. Helena School until he gained acceptance into the prestigious Archmere Academy. Although he had to work by washing the school windows and weeding the gardens to help his family afford tuition, Biden had long dreamed of attending the school, which he called "the object of my deepest desire, my Oz." At Archmere, Biden was a solid student and, despite his small size, a standout receiver on the football team. "He was a skinny kid," his coach remembered, "but he was one of the best pass receivers I had in 16 years as a coach." Biden graduated from Archmere in 1961.

These few lines about his early childhood background are synonymous with millions of poor struggling children in Nigeria and Africa just as these tough childhood experiences could have really made him such a broad minded American that easily mixes up with persons of other races. Little wonder that he opted to appoint a black woman as his running mate in this election of a life time.

By the time he is sworn in come January 2021, the Joe Biden Presidency would have to hit the ground running to do a lot of damage control in the area of United States and Africa relations.

It is clear that in the last four years of President Donald Trumps Presidency, he practically walked away from Africa and was basically fixated about his America first ideological politics. Within those four years, China almost stole the show in Africa by filling out dubious loans to rogue African governments including the President Muhammadu Buhari of Nigeria who has borrowed so much from China to the extent that it is possible for China to take over ownership of strategic national assets of Nigeria should the Nigerian government default in the repayments of these dubious loans.

And in those four years, a lot of damages have been done to democracy on the continent of Africa with several distorted and heavily manipulated elections in places like Nigeria, Zimbabwe, Burundi, Rwanda, Ivory Coast and many others in such away that democracy in Africa is threatened. With the decline in the quality and standards of democracy in Africa and Nigeria also comes with the declining respect for the fundamental human rights of Citizens as enshrined in the constitution of the Federal Republic of Nigeria of 1999 as amended. Nigeria in the last five years has witnessed unprecedented proportions of gross human rights violations committed by the National and state governments with a lot of forced disappearances, prolonged illegal detention of independent critics of the central government and the activities of Islamic extremists and terrorists have escalated in the last five years.

A piece done for the www.borgenmagazine.com is of the effect that Joe Biden’s aspiration for bipartisan cooperation and fortifying collective capabilities with Asia is reflected in his prospective foreign policy plans with Africa, which emphasize good governance, public health and youth development. This is so true because few days back when the Nigerian Army reportedly shot at unarmed protesters in LEKKI Toll Gates Lagos state, it was only Joe Biden who intervened and warned the Nigerian administration to stop killing youngsters in Nigeria. Joe Biden was indeed the first international politician to take out some of his precious times out of his very hectic campaign period to articulate a broad based position to the effect that the President Muhammadu Buhari administration must stop the killings and bring the killers to trial.

Amongst the International diplomats that spoke about Nigeria was the United Nations Secretary-General, António Guterres, and his deputy, Amina Mohammed, a former Nigerian Minister of the Environment, have called on the Nigerian government to end the killing of protesters against police brutality in Nigeria.

"The Secretary-General stresses the importance of respect for peaceful protests and freedom of assembly and calls on the security forces to exercise maximum restraint in the policing of the demonstrations.

"The Secretary-General welcomes the decision by the Government of Nigeria to disband the Special Anti-Robbery Unit and undertake broader police reforms. He expresses the readiness of the United Nations to accompany Nigeria in those efforts," the UN said.

On her part, the deputy Secretary-General said "The UN & I are following the protests in #Nigeria calling for an end to human rights violations. I join the #UNSG in stressing the importance of respect for peaceful protests & freedom of assembly & call on the security forces to exercise maximum restraint."

Also, Joe Biden, US presidential candidate of the Democratic Party, has asked President Muhammadu Buhari to cease the violent crackdown on #EndSARS protesters.

In a statement, Biden asked the federal government to engage in dialogue with the civil society in order to address citizens' grievances.

He added that the United States must show solidarity with Nigerians who are peacefully seeking police reform and asking for an end to corruption.

"I urge President Buhari and the Nigerian military to cease the violent crackdown on protesters in Nigeria, which has already resulted in several deaths," he said.

"My heart goes out to all those who have lost a loved one in the violence. The United States must stand with Nigerians who are peacefully demonstrating for police reform and seeking an end to corruption in their democracy.

"I encourage the government to engage in a good-faith dialogue with civil society to address these long-standing grievances and work together for a more just and inclusive Nigeria."

Hillary Clinton, former US secretary of state, had also asked Buhari to stop the killing of the protesters.

In a tweet on Tuesday night, Clinton lent her voice in support of those who had condemned the action of the soldiers.

"I'm calling on @mbuhari and the @hqnigerianarmy to stop killing young #EndSARS protesters," she tweeted.

I'm calling on @mbuhari and the @hqnigerianarmy to stop killing young #EndSARS protesters. #StopNigeriaGovernment. So, it is certainly looking good for democracy and human rights in Nigeria should Joe Biden emerge as the 46th President of the World's most powerful Democracy.

Still reflecting on Joe Biden's prospective African foreign policy direction, we recall that the 2014 U.S.-Africa Leaders Summit invited “50 African presidents and senior officials to Washington” to discuss trade, investment and the security of the continent. Similarly, Senator Chris Coons, a member of the Foreign Relations Committee, stated that Biden plans to undertake similar initiatives to Obama’s frequent engagement with African leaders via summits.

He will also attend regular travel to Africa along with senior administration officials. In addition, there will be a larger push to get “appropriately skilled ambassadors” in embassies across Africa.

Incidentally, the Council on Foreign Relations additionally asked Biden how the U..S. would adjust its policies in response to Africa’s projected population growth.

2. Empower African women as they are essential in development.

4. Demonstrate the American model of democracy.
Researchers say Biden’s inclusive oriented proposals regarding Africa would be a significant step towards eradicating poverty.

According to the U.N., poverty in sub-Saharan Africa entails more than a lack of income but also stems from “discrimination and exclusion as well as a lack of participation in decision-making.”

Countering Terrorism and Violence in Central Asia according to those who should know, they say Joe Biden aims to alleviate political instability, governance challenges, issues with poor security and economic losses in Afghanistan by adopting these methods:

 Designating U.S. military presence in Afghanistan that focuses on counterterrorism operations, which would be vital in dismantling Specially Designated Global Terrorist Entities (SDGT) like the Taliban and Haqqani network.

A Joe Biden's Presidency will inevitably help the West Coast of Africa to wage unrelenting war on terror. Terrorists and Islamic fundamentalists have posed formidable threats to the stability of Nigeria and the West African region. The coming of Joe Biden as the President of the United States of America can go a long way to stop terrorists before they destroy and destabilise Africa and Nigeria. With Joe Biden, Nigerians should be hopeful in addition to the issue of removing the Visa restrictions against Nigeria, the Presidency of Joe Biden can as well boost trades between Nigeria and the USA. All these aspirations can only be attainable if the Democrats control the Congress of the USA.