... Reminds Governor Of How He Used Ipob Mob To Win 2015, 2019 Elections ..... Says It's Illogical To Claim Same Ipob Which Attacked Amaechi In Foreign Land Now Works For Him
By Chile Nwaorgu 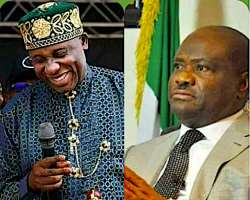 Chief Eze Chukwuemeka Eze erstwhile National Publicity Secretary of the defunct New Peoples Democratic Party, nPDP and a Chieftain of the All Progressives Congress, APC highlighted that nothing has exposed most public officers in Nigeria than the EndSARS protests and riots, and this seems most tragically true with the helmsman in Rivers State, Gov Nyesom Wike. This is especially so because, whereas other Governors have looked before leaping, he seems to leap before looking.

Nothing could have proved this assertion more true than his ban on protests only to gleefully welcome the same protesters to Government House where he glowed in the euphoria of someone who started the End-SARS campaign.

Next, the same man who mocked his kinsman and Minister, Rt Hon Chibuike Rotimi Amaechi for allegedly being mobbed overseas by the same IPOB is now turning round to accuse a Rivers man of sponsoring IPOB. Many have thus wondered if Gov Wike must call his former mentor’s name in every evil flying around Rivers State to such an obviously embarrassing level to himself. This is the same IPOB that stands against anything and everything North; everything Buhari; and everything APC of which Amaechi symbolises.

Thus, Wike’s recent calumnious and odoriferous outburst against the Transportation Minister, Rt. Hon. Chibuike Amaechi, as the proponent and financier of the topsy-turvy and huge human and material destruction allegedly perpetrated by members of the proscribed Indigenous People of Biafra (IPOB), has been described as a mountain of illusion merely palpitating in the web of debacle.

Governor Wike, had during a live interview on AIT on the fallout of the End SARS protest and the report of mass killings of IPOB members in Oyigbo, a Local Government Area in Rivers State, accused the Transportation Minister of sponsoring the crisis that rocked the #EndSars protest in the troubled LGA and other violence spots in Port Harcourt and other areas in the state, stressing that the Minister is disturbed by his rising political profile.

Excerpt from the reported speech of Gov. Wike on the AIT Program beamed live Monday, 2 November, 2020, reads: "I know where all this is coming from. They think they can sponsor all sorts of rubbish against me. I know it is coming from the Minister of Transportation. Why will he (Amaechi) not do that? He thinks that I am rising politically, and he is doing everything to bring me down. Everybody knows that. It is not hidden. I cannot change my identity."

Referring to the claim as a cocktaildestitute utterances, the party chief said Gov. Wike may have been deceitfully immersed into a pool of egotistic make-believe by attaching to himself a strange and exaggerated sense of self-importance in his hilarious comment about his self-deluded 'rising political profile'.

"To where is his political profile rising when his actions and programmes have shattered the economy and general fortunes of the state?" Eze queried.

Eze reiterated that only idle minds will be bored by the said Wike's raising political influence as it only exists in pages of newspapers and AIT TV but not based on current political reality.

The party stalwart posits that although the PDP Leadership has continued to tolerate the excesses of Wike but expressed confidence that he will soon pay for the very many embarrassments and shame he has brought to a party that was once the best political party in Africa.

Eze counselled Gov. Wike to desist from making nonsense of the exalted position of a Governor and show some respects to the office he occupies. He said the Governor could as well strive to acquire some skills in public speech-making so as to improve his performance next time his application to appear on a national TV scales through.

The party chief said it pricks the conscience to learn that Gov. Wike, who once served under Amaechi as Chief of Staff and was later recommended to be a Minister by Amaechi will make such untoward, wicked and disparaging allegations against his all-time benefactor.

Eze wondered how Amaechi could have anything to do with a proscribed group when in fact, he was a victim of their rampaging madness in 2018.

Eze reminded Wike that Amaechi, an Igbo man by marriage (married to one of the finest Igbo Ladies, Dame Judith Amaechi) is always entitled to discuss and promote issues pertaining to the future and progress of the Igbos and to be accused of having a hand in any criminal activity of any Igbo man or group is very unfortunate and unacceptable.

Condemning in strong terms the wanton destruction allegedly perpetrated by IPOB miscreants in Oyigbo and other parts of Rivers State, Eze described as unacceptable the attack on other innocent Igbos living in Rivers State and other parts of the country by thugs and some security agents, adding that a majority of the Igbos are peaceful, patriotic and hospital citizens and should not be victims of miscarriage of justice.

Eze called on Wike to resolve any issue he has with IPOB members which are the creations of his insincerity and dishonesty, stressing that Amaechi was not there when he engaged these fellows as part of his 2015 and 2019 election rigging mercenaries. He said the powers Gov. Wike handed the IPOB members during elections gave them the impetus to operate recklessly and his refusal to keep to terms of their agreement gave rise to their uncontrolled operation.

Igbo traders at the Mile One and Ikoku spare parts markets are today under siege by Wike who has suddenly feigned ignorance of how he dubiously instigated them against the APC to win election. Today, Messiah 'Wike' is doing everything to ensure that their businesses in Rivers have collapsed. Wike is systematically doing this through many fronts.

Governor Wike should try to leave Amaechi out of his self-inflicted and avoidable political woes as I end this statement with a quote from one of the most respected sons of Rivers State, Dr Jackson Omenazu who stated and I quote, "Wike is a loose cannon. Amaechi uses good governance and leadership to promote peace among Rivers people. But Wike uses bullying and crass brigandage to ascend to power hence his restlessness. Amaechi has never been known to associate with violent people nor have he ever supported demented souls. We know ourselves in this state, we know those whose life style is synonymous with violence"