BNL hails Amaechi for declaring he is Igbo, blast Wike 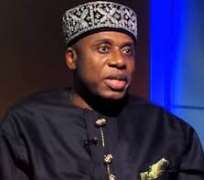 Biafra Nations League, BNL (formerly Biafra Nations Youth League, BNYL) has called on the Rivers State Governor Nyesom Wike to stop killing of residents of Oyigbo LGA, Rivers State. The National Deputy Leader of BNL and Director of Operations BBS Media, Ebuta Takon Akor wondered why an Igbo Governor like Wike would be linking destruction that followed the #EndSars protest to a particular group of people. BNL dismissed claims by the Rivers State Governor that the former Governor Chibuike Amaechi is sponsoring the propaganda of killing Igbos against him, adding that Wike is doing what he is doing to counter Amaechi who declared in series of public appearance that he is an Igbo man from Rivers State.

"We know where Wike is coming from and where he is going to. I followed his recent interview on AIT and discovered he has been looking for an opportunity to tackle Chibuike Amaechi who declared his Igboness publicly. In countering Amaechi, Wike also declared to be non Igbo Rivers man but he never knew he was disgracing himself because the name Ezebunwo Nyesom Wike is not a Niger Delta name, but an Igbo name"

Ebuta Takon Akor, an Ejagham native in Cross River State said whether Wike accepts to be Igbo or not, the South South people knows those parading themselves as Niger Delta and those who are Niger Deltans, "Wike is an Igbo man" he said.

BNL said Amaechi deserves an award for breaking the spell in Rivers State, according to him, the spell has held them hostage for years after the war that a lot of them now deny their ethnicity.

"Wike should be ashamed that he does not know where he comes from, he has found a new ethnic group" Ebuta said.

Biafra Nations League BNL is a pro Biafra group fighting for the restoration of Biafra alongside the indigenous people of Biafra, IPOB, the group recently renamed it's organization to BNL to accommodate the elders.