Fdc's Amuriat May End Up Doing Better Than Bobi Wine! 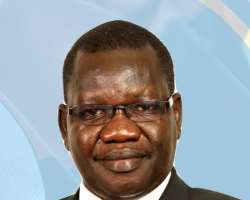 Engineer Patrick Amuriat may end up pulling more votes than Kyagulanyi Sentamu aka Bobi Wine at the end of this electoral process. People in the North and East still live as communities-- their leaders still command respect. If an MP in the North tells his people to vote for POA, they will do so, unlike here in the central. Most MPs in central Uganda are totally disconnected from the voters-- voters don't respect them that much and rarely listen to them. In otherworld, MPs in the central are not as powerful as MPs in other areas. For instance, a Beti Nambooze is not as powerful as Hon. Nandalla Mafabi in Bugishu. MPs used to be products of cooperative societies, and that made them powerful-- one of the reasons the Museveni government is reluctant to restore cooperatives.

If POA gets votes in the North and East, then he could end up being a surprise number two in Feb 2021. I have never seen the Forum for Democratic Change (FDC) so organised, determined and pumped up, as they are now. Their grassroot structures seem to be breathing. They have paid nomination fees for all their parliamentary candidates. They have nominated more MPs than ever before (over 300 were nominated), and they are training them. They are printing posters for all their candidates. FDC is operating like a party in a developed country, thanks to the current leadership. I understand Dr. Kiiza Besigye is trying to avoid taking sides in this election but he has to come out and start moving with Amuriat throughout the elections.The party needs him badly!

All serious political parties should have presidential candidates in this election, because this election is more about party promotion than winning the presidency. FDC is16 years old, as old as the National Unity Platform (NUP). The latter is also in this election to promote itself, not to win the presidency. Furthermore, I believe that FDC is not using this election as ammunition against Bobi and his NUP but as a way of making sure that the party is not further weakened by Bobi and his NUP. Nobody is in this presidential election to beat Museveni, I think. Strong arming FDC to support a NUP presidential candidate did not work, and will not work now, basically because Bobi is not a good negotiator. Apart from JEEMA, I do not see any other party willing to back him for the presidency.

Bobi’s selling point was youthfulness, but his party did badly in the youth elections this year. NRM won by over 80% of the national vote. NUP and FDC got 2% each, UPC and DP 1% each while independents had won 15%. However, NUP and FDC had a majority vote in Masaka and Rukungiri respectively. Let me put it this way, even if all parties don't front candidates and leave only NUP to do so , Kyagulanyi will not win against Museveni, or rather he won't be declared the winner of the presidential election. There's a lot of puffery on Bobi, especially on social media, but when actually he isn't as strong as he's portrayed.

Sometimes the best way to deal with the disappointment in one arena is to accomplish something else. If FDC cannot remove an old M7 from power through elections, there is nothing wrong with strengthening their position as a political party. The alternative is to let the party fall apart because it seemingly failed one singular assignment-- an assignment no party will accomplish, anyway. NRM had only nine unopposed MPs in the 2016 elections and only seven this time—that means that FDC and other opposition parties are getting more organised and confident with Multi-party politics. Let every party promote itself and we see our things pan out in future.