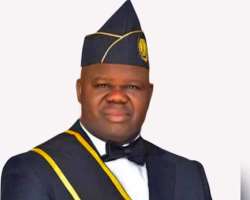 A ponderous look at both the duration and donation in the life of Tobias Chukwuemeka Okwuru (Ali - Ezza) confirms the submission of Poet Eje Agama that "The pot that fetches good water breaks too soon"! Okwuru passed for one of the most vivacious politicians and socialites that walked the soil of Ebonyi State. A jolly-good fellow in all ramifications, this man who was popularly known as Ali-Ezza was a serial catalyst for happiness. With his bulky but easy-to-move size, penchant for charity, unparalleled vivacity, his cross-strata personality which enabled him to blend with people of all classes in the social strata; and his slogan of "Onye l'eteri iwhe, njee ya", Okwuru who was described as "A Giver-Without-Boundary" electrified every social circle in which he found himself.

Chief Tobias Chukwuemeka Okwuru (KSM) was born to the family of Chief Michael and Mrs. Christiana Okwuru in the pastoral community of Amudo in the then Ezzikwo Division (now Ezza South Local Government Area of Ebonyi State) on 26th August, 1961. Like all people of humble birth, no comets heralded the arrival of Tobias Chukwuemeka Okwuru. He had his primary and post-primary education at St. Paul’s primary (now Community Central School, Amudo) and Boys’ Secondary School, Ezzamgbo, respectively. Later on, he bagged a second-class (Honours) degree in Government/Public Administration from Imo State University, Owerri.

The life of Hon. Tobias Chukwuemeka Okwuru (a.k.a. Ali-Ezza) is a classical manifestation of Thomas Hardy’s submission that ‘time changes everything’. Within a life span of 59 years, Okwuru transformed himself from the humble, pastoral lad of Amudo whose soccer talent earned the sobriquet, "Chairman Crackers", in Boys’ Secondary School, Ezzamgbo, to both a human and political phenomenon, as well as a reference point in charity, humility and positive management of public trust. Okwuru’s life is a recurrent reminder of the story of the faithful servant in the parable of the talents as told by our Lord in the Holy Bible. His demonstration of good faith, and commitment to the pursuit of the common good when he served as the secretary of Amudo Town Union between 1987 and 1990 set him on a trajectory of political career which culminated in a rich experience that has traversed the gamut of the three tiers as well as two arms of government in Nigeria: He was Ward Secretary Social Democratic Party, SDP, Amudo/Okoffia ward 1991 - 1993; Councillor, Amudo/ Okoffia ward between 1996 and 1997; Supervisor for Works, Ezza South Local Government Area in 1997; State Administrative Secretary, Democratic Party of Nigeria (DPN), Ebonyi State, 1998; Pioneer State Auditor, Peoples Democratic Party (PDP), Ebonyi State, 1998 -1999; Pioneer Chief Whip of Ebonyi State House of Assembly from 1999 to 2003; Pioneer Leader of the first one-party Ebonyi State House of Assembly from 2003 to 2007; Ebonyi State Commissioner for Public Utilities from 2009 to 2010; and member representing Ikwo/Ezza South Federal Constituency in the 7th House of Representatives from 2011 till 2015.

Throughout the eight years Okwuru was in Ebonyi State House of Assembly, he moved several motions, sponsored several bills, and attracted many developmental projects to his people. He was Chairman of the House Committee on Creation of Local Governments in 2001, and so, was instrumental to the creation of the first-generation Development Centres in Ebonyi State, Ezza South, and for Ezza people in the Diaspora of Inyaba and particularly, Ukaba and Effium.

In the Green Chambers of the Nigerian parliament, Okwuru sponsored several motions; prominent among which were the motion to ensure that the Federal Government refunded various State Governments the various sums of money they spent in the rehabilitation/reconstruction of federal roads within their respective states; and the motion to ensure that the Federal Ministry of Works urgently reconstructed the collapsing bridge at kilometre 8, Enugu - Abakaliki expressway, near Industrial Training Fund Office, in Enugu. It is instructive that Ebonyi State and Ebonyi people have continued to benefit immensely from those motions till this moment.

Within Okwuru’s short stint as the Acting Chairman of House of Representatives Committee on Environment, he attracted the Iyiudele–Azuiyiokwu flood control project to Ebonyi State. His comments on national development have shaped Federal Government’s policies, especially the review of Nigeria’s commitment to ECOWAS immigration policy.

The outstanding traits of Okwuru which endeard him to people were his humility and forbearance. He was always in a hurry to forgive those who offended him. Ali-Ezza, as Okwuru was fondly called, had consistently demonstrated an exceptional capacity to handle provocations in a very mature manner. Okwuru was every inch human and humane: He never denied his fallibility and was quick to apologise for his errors. Okwuru ran a successful career in forgiveness: He even forgave people their wrongs in advance. For all these and more, elders of Ebonyi politics referred to him as the Waziri of Ebonyi politics. This was in apparent comparison of Okwuru with Ibrahim Waziri - the apostle of ‘politics without bitterness’. As a compassionate leader, Okwuru found time to share in his teeming supporters’ laughter and sorrows. All these culminated in the highly infectious charisma which was the major selling point of Okwuru. His consistent investment of resources and energy in both the Lord’s vineyard and in human empowerment was also another strong source of the enormous goodwill which he enjoys even in death. Through his Ali - Ezza foundation, he funded many church projects and provided scholarships, free medical assistance, free transport schemes, and facilitated gainful employment, economic empowerment e.t.c. for the needy without regard to tribe, religion and political affiliations. Between 2012 and 2013, Okwuru sank a total of 30 water boreholes: 16 in Ikwo LGA; and 14 in Ezza South LGA; and executed rural electrification projects in Amana, Nsokkara, Amegu, Amezekwe, Umunwagu, Amudo and Okoffia communities of Ezza South LGA.

In the earth-breaking 2013 edition of Okwuru’s “Festival of Thanks”, he distributed: 38 units of 300KVA transformers; 55 tricycles known as KEKE ALI-EZZA, 25 units of 5KVA power-generating sets which were distributed among traditional rulers in Ikwo, Ezza South, Ezza North, Ugwulangwu in Ohaozara and Ezza traditional rulers in the Diaspora; 250 units of motorcycles, 120 sewing machines, 20 units of electric welding machines, 10 sets of barbing equipment, and 20 sets of hair-dressing equipment to his constituents and other Ebonyi people. He followed this up in 2014 with the distribution of nine more units of 300KVA transformers to Umuhuali, Ogboji Ezzaegu and Azuinyaba communities all in Ishielu LGA; Ibenda-Effium in Ohaukwu LGA; Ukaba in Onicha LGA; Unwuezeokohu, Oriuzor and Ekka communities in Ezza North LGA, Ebonyi State; and Ebura Echara Kingdom in Obubra LGA of Cross River State, all of which are outside his constituency. In fact, it is on record that Okwuru has attracted a total of 46 units of 300KVA transformers among other things to Ebonyi State. For these and more, Ebonyians voted Okwuru as the Best Federal Legislator in the history of Ebonyi State in an on-line poll conducted by Ebonyi State Ministry of Information and State Orientation in conjunction with Green Blaze Magazine in March 2014. A man who has been justifiably described as a Giver-Without-Boundary, Okwuru has become a crowd-puller in his home state of Ebonyi, and beyond. This member of the prestigious order of the Knights of Saint Mulumba holds various chieftaincy titles and awards in Ebonyi State, Asaga Arochukwu in Abia State, Ebura-Echara kingdom in Obubra, Cross River, and Jato-Arka in Benue State. Okwuru’s creative approach to politics was celebrated by his peers within the National Unity Group (NUG) of the 7th House of Representatives where he introduced what was widely known as “black and white" politics. All these have made the humble boy of Amudo the pride of Ebonyi people and a charismatic leader celebrated across geographical, political, religious and tribal borders whether in or out of office.

To his wife, Okwuru was a loving husband. To his biological and foster children as well as his brothers and sisters, Okwuru was a caring father and dependable family head respectively. To his retinue of aides and servants, Okwuru was a compassionate and humane boss. To his ever-increasing constituency of followers and admirers, Okwuru was a role model.

That Tobias Chukwuemeka Okwuru, Ali-Ezza, has not emerged with the gait of Ijele masquerade to ignite fireworks of boisterous banters, handshakes and convivial pops brings home the harsh reality of his transition to all of us. Like candle in the wind, Ali-Ezza is gone to be with his maker! We are left to wonder with teary eyes. Our consolation lies in the hope of resurrection; the fond memories we share of Mgbo-Igwe's eventful life; and in the galaxy of positive and evergreen legacies standing in the name of Enyi Jesus.

May the vivacious and vibrant soul of Tobias Chukwuemeka Okwuru find rest in the bosom of Jesus Christ whom he served with all his energy. Amen!