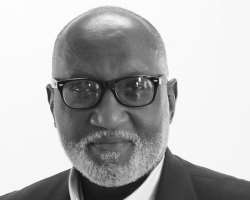 Sir, Nigeria is in dire straits. What are your views on pressing national issues and challenges confronting Nigeria? Let’s start with the most topical, the significance of protests against special anti-robbery squad, any necessity for police reforms.

Obaze: Protests against SARS’ overreach was perhaps long overdue. As a nation we let the complaints against police brutality nationwide, linger for far too long unaddressed. The police is a national institution and should be supported; but rogue elements within security outfits, not just the police, must be flushed out as they tarnish the collective image of such institutions. Police brutality, torture and extra-judicial killings, where there have occured must be investigated and the culprits brought to book. We have arrived at the moment of truth; there is no more dodging the issue. Along with the panels set up by FGN, we must embark on meaningful police reform and seriously consider State police.

Obaze: The Nigerian military has statutory responsibility and means of dealing with such matters, which starts with a Board of Inquiry. Nonetheless, the matter has been mishandled. Neither the Federal Government nor the military has openly admitted that the shooting occurred, despite abundance of social media evidence supporting such allegations. This has led to suspicions of a cover up. If in the end the shootings are proven to have occurred, those involved and even those involved in the cover up must be held to account.

Yoruba/Igbo face-off in Lagos is troubling. What’s your view?

Obaze: It’s sad that some try to romanticize their deep-seated proclivities for ethnic distrust by giving every crisis an ethnic colouration. The #EndSARS protesters comprise of an eclectic youthful crowd, which definitely crossed every ethnic consideration. But those with long-standing hidden agenda have sort to undermine the protestations by injecting hoodlums into the process. Their hint that the unfortunate destructive and looting fallout have ethnic undertones, is also not true. Looting happened across the nation, not in Lagos alone. So such attitude is troubling, but such claims by nattering nabbob of negativism ought not to be countenanced, talk less of being dignified. I’m glad that there has been a pushback from credible quarters.

Speak to the Covid-19 palliative warehouse looting and their implications on future of the country.

Obaze: As I’ve remarked before now, there is a raging debate about the so-called looting of FGN Covid-19 palliatives in about ten states. As a nation, we should be dubious as to the intent of those who hoarded palliatives while millions of Nigerians starved. The morality or immorality of such policy or official conduct is not too hard to decipher. If Borno state could share its palliative transparently in one day, so could have the other states. I’m not a supporter of rascality or surrogate for advocates of looting; but it needs to be said that Nigerian officials who callously made the orderly and peaceful sharing of Covid-19 palliatives impossible, made the ongoing disorderly and riotous grabbing of the palliatives inevitable. Good governance goes hand in hand with morality. Going forward, government officials have to be proactive and transparent.

What is your perspective on restructuring?
Obaze: The awareness that Nigeria has to restructure or self-destruct, is quite perversive, despite a sense of denialism in certain quarters. Whether restructuring, which presently does not command or lend itself to a singular definition will happen, is not doubtful. The existing dichotomies in power, resources sharing and derivatives, compel restructuring. The question is when and how, even as the aggregation and nomenclature of the political posse that will bring the change about, remains largely speculative.