Call on Bako Adamu Idris to Disclose Sources of Funds He Used for Awards of Top Govt Functionaries
By Sadiq Abubakar, The Nigerian Voice, Maiduguri 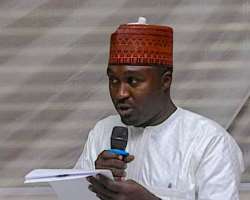 The organized about union ( Nigeria Labour Congress) Borno State has in strong term expressed it's dismay with the conflicting behavioural attitude and misleading financial reports being submitted to the state government by the Head of Biometric Data Capturing Team who is the Director of Salary, Salary Office, State Ministry of Finance.

The compounding and lingering issues surrounding the payments of salaries and allowances as well as the Pensions, gratuities and leave grants have compelled the Borno State Council of the NLC rising from it's emergency meeting endorsing the Communique issued at the end of the meeting on Saturday that Governor Babagama Umara Zulum should as a matter of urgency and Transparency remove the Head of the State Biometric Data Capturing Team, Bako Adamu Idris from office.

He added that the labour union further called on the awarder, Bako Idris to withdraw all the awards he awarded or made to some top Government functionaries and explain it give account of where and how he got the money he used to organize the award as a middle level civil servant by rank or status despite the peiviliges bestowed in him" Bulama said.

However,it was observed that this was coming at the time the Borno state House of Assembly (BOSHA) has approved for the governor through an executive bill send to the house on collection of a N15 billion to facilitate the full payment if civil servants salaries, allowances, leave grants, gratuities and pensions both at the state and local government levels

Similarly, the organized labour union said the civil servants promotion benefits and annal or yearly increments have also been stopped it bit paid by the governor although, the Govenror has tried in some aspects of payments like the monthly payments of salaries.

"We commend the governor in that aspect . He has been trying and we understand but the situation has become deteriorating and we are touched to the wall. We can no longer bear it.

"The Head of Biometric data and Director salary if the ministry of finance must go. All these must stop. We say enough is enough and there is no going back. We have taken our decision and made ourselves very clear in the interest of our members who have been suffering and in tears or agony for years. For over 47 months .

" We call for the removal of the Head of Biometric Data Team. Call on the beneficiaries of the state awards to return the awards and they should apologise to the state NLC. The Organized labour gives them two weeks to comply it face the harsh decision of the NLC.

"We are communicating to the BOSHA to stop appointing such awardees as government appointees ," Bulama said.

In issue of number of civil servants statistics on the biometric table, Comrade Bulama Abiso said the total number of workers captured were 500,000 while 88,000 workers were not captured and over 103,000 pensioners but presently, those screened and captured were paid by the governor Thursday.

He added that N500 million was claimed to have been recovered but there are hundreds of workers and pensioners that were ommited, not captured and have BVN Problems that all were excluded from the list forwarded to the state Governor for vetting , stressing that, "this is where the problem lies and we have to talk".

The NLC Chairman noted that the labour union did not take it's position earlier because the Governror requested the labour union to submit it's demands and uptil date most of the issues or demands are still pending due to the compounding issues and ormissions in the biometric data capturing system.

"Because we are now bitter about the delay, the confusions, the non payment and instability in the entire biometric processes. All these years , we have been patient enough without much response.

" But we are not saying that, the state Governor or government did not do anything much. It has tried but the whole problems laid in the biometric data capturing system and salary office as well as the pension issues

"Thousands of civil servants have been captured by the biometric data capturing committee but the said or affected workers have not been paid uptil date", Abiso said.