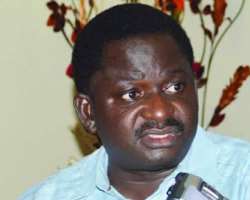 Chinua Achebe’s ‘Anthill of the Savannah’ – his seminal work after a twenty-one year hiatus in novel publishing is eternally relevant as it encapsulates the challenges faced by journalists in Nigeria in the effective discharge of their duties. In the novel, three friends – Sam, Chris Oriko and Ikem Osodi find themselves at the helm of affairs in a fictional African nation known as Kangan. Sam is the military Head of State who adopts the title of President while Chris is his Commissioner for Information and Ikem the Editor of the government owned National Gazette. Ikem is highly critical of Sam’s dictatorial regime with Chris who was his predecessor at the National Gazette adopting a moderate stance in his now awkward position of having to officially defend the policies of an autocratic regime. He and Ikem clash frequently as he didn’t want to offend his boss.

The challenge faced by Chris is the cross many modern day government spokesmen face in the performance of their duties. Many of these journalists start out as vibrant and brilliant moulders of public opinion through their acerbic pens which prove to be mightier than the sword and guns. They become widely popular as they identify with the down trodden who look forward to their columns as it provides a soothing balm in their reality of being domiciled in a largely failed state. The oppressors determined to clip their wings then offer them political appointments to be the official mouthpieces of their murderous regimes which the so called consciences of the nation’ grab like candies as it provides a better deal for them economically since the pen pushing job in most cases doesn’t offer them a pension or any form of insurance plan.

Femi Adesina was one such journalist in his prime while he held sway at the defunct National Concord and the Sun Newspapers. His column was a delight to read and he was a voice for the voiceless who used his gargantuan media clout to draw the attention of the government to the social ills that the nation grappled with.

In the run up to the 2015 General Elections, he teamed up with the then opposition All Progressives Congress (APC) and sold them to the country through his column and pressed home his demand on the need for Nigerians to give the erstwhile dictator, Muhammadu Buhari a second chance. He painted the government of Goodluck Ebele Jonathan as extremely corrupt and said that we should give ‘change’ a high level of audience with the use of our permanent voters cards (PVC).

History was made and Buhari became the first Nigerian leader to defeat an incumbent President. One good turn deserves another goes the age-long cliché and the Deacon with the Deeper Life Church and former Managing Director of the Sun Newspapers was rewarded with the position of Special Adviser on Media and Publicity to President Muhammadu Buhari.

Buhari came with a high approval rating as his handlers sold him as a reformer who loathed corruption and so the appointment of Adesina was hailed as a master stroke of a leader who wanted to more effectively feel the pulse of the populace.

The true colours of the government was shown no sooner than later and Adesina found himself in the unenviable position of having to defend a clueless government. Why didn’t he resign? Resignations from political offices are not common place in this part of the world. What was he going to do outside the Villa? He had eaten the forbidden nectar and there was no going back.

He appeared on a live show ‘Politics Today’ on Channels Television and sturdily defended his boss’s omission of any reference to the Lekki shootings in his last speech to Nigerians. Adesina was quoted to have said: “The Defence Headquarters issued a statement to say that it was investigating the matter. Lagos State Governor has also set up a probe panel to investigate what really happened.

“So, the President couldn’t have said anything because it would be premature and presumptuous while investigation is ongoing. It is after investigation has been concluded that he can speak on the matter.”

This remark was highly insensitive to say the least. Peaceful protesters who were unarmed and had been successfully protesting for over two weeks were shot at on October 20 2020 – the black Tuesday and his principal couldn’t offer any word of empathy for the victims. What manner of asinine investigations is he talking about? Is he saying indirectly that soldiers didn’t invade the place, turn off the lights and CCTV cameras and open fire on the hapless protesters?

How cruel can Adesina be in backing his master’s assertion that the Lekki victims don’t deserve a place of mention in his drab twelve minutes speech?

Thank God for social media as the monopoly once held by the traditional media has now been sent to the trash can. Popular Disc Jockey, DJ Switch captured the entire gory episode on her Instagram live handle and beamed it to the world. What manner of investigations is he now talking about? Is he denying the shooting?

Under normal and sane circumstances, his boss is supposed to have visited the Lekki toll gate scene as well as the families of the murdered protesters to assuage them and offer them hope for the future. All he can offer is an extremely dull speech with his minion tragically defending his crass incompetence.

Is Adesina now so cold blooded that he must defend his job at all cost even bargaining his conscience for the Biblical mess of pottage? Nobody in his right senses would commend Buhari for not mentioning the Lekki victims in his caricature of a speech. How would Adesina have felt if any of his children was in the morgue as a result of the bullets from the trigger happy soldiers? We have the ridiculous case of some children of high ranking officials of this blood thirsty joke of a democratic government turning their backs on their parents and identifying with the hoi polloi.

Zahra Buhari and Kiki Osinbajo publicly identified with the #End SARS protesters. Long before the protests, Moremi Ojudu, the daughter of Senator Babafemi Ojudu, the presidential adviser on political matters has organized rallies railing against the Buhari led government.

Adesina should be deeply introspective of how posterity would judge him as he won’t be in power forever. He shouldn’t forget the past so hastily because of a mere romance with the Devil as one day whether alive or dead, his deeds would be critically examined and the verdict may upturn his earlier good works while he was still a core media man.

I don’t blame Simon Kolawole, former Editor of Thisday and Publisher of The Cable for saying that he prefers to stay off any form of political appointment. A few journalists share the same view as it seems to be safer for their consciences.

I appeal to Buhari to visit the Lekki toll gate and supervise its permanent dismantling as it should be set up as a monument in honour of his slain countrymen. It is not too late for Adesina to convey this wish of mine which represents the views of millions to him. This may just be a way to redeem his battered image of being his master’s voice if he is too scared of throwing in the towel.