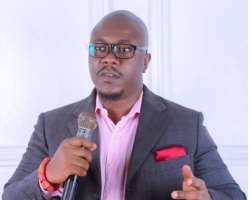 The #ENDSARS orchestra which began with non-violent tunes has metamorphosed and now serenades to macabre tunes of an apocalypse – sorrow, tears and blood! Wanton destruction, pain and death rage on to the morbid fascination of all manner of underground conductors lurking in the shadows!

Worrying indicators point to a multiplicity of veiled conductors who have hijacked the #ENDSARS protests with sinister and ambiguous motives, doing their damnedest to skew the narrative, aligning to whatever their agendas are.

From interference of Authority sponsored mischief makers, to political, ethno-religious destabilization mongers, to shadowy manipulators lurking within the labyrinths of social media – they have sufficiently given fuel to anarchist agendas.

What is now getting clearer by the day and abominably so, is the plethora of ratcheted, orchestrated disinformation employed by these cloaked players to suit their particular narratives.

Urgent and critical messages sent through to “organized disbursers” bestriding social media aimed to halt the descent towards anarchy have gone unacknowledged and unheeded – create a handful of bastions as protest bases and desist from sending money and logistics indiscriminately to start bush fires everywhere! These protest zones should be brought to the attention of the authorities while at the same time asking them to provide security. The protest spaces will thus be better coordinated and less susceptible to rogue elements. With better coordination, there will be a halt to blocking of highways and generally antagonizing other members of the public whose support cannot be taken for granted and whose rights to freedom of movement cannot be infringed. Most importantly, these spaces become a moral bubble making any interference of immediate consequence.

Lekki toll gate was such a bubble and the shootings there has resonated with consequential reverberations across the world, but for days on end more people have been killed and continue to be killed indiscriminately across the country.

One would have thought the essence of the protests was to bring burning issues to the front burner and persevere to see those issues addressed! What is the essence of starting bush fires everywhere and anywhere putting at risk the very people who are in the direst need of succour – opening the door to anarchy!

The man who I consider to be the primus inter pares of the #EndSars advocacy, Mr. Segun Awosanya (Segalink), who has over the years created a niche for himself as a foremost advocate for Police reforms has been butchered, vilified and maligned in a well oiled campaign of usurpation by emergency activists ensconced in the slinking shadows of social media.

Bolstered by vast financial muscle and using the same means in reverse osmosis, that the political class has employed to keep the people subject and in line, "stomach infrastructure" – these leaders, and yes, leaders, have surreptitiously led in the campaign of calumny against Segalink and continue to lead the #ENDSARS protests.

Dubious underground conductors must desist! The flames from the anarchist fires stoked by these conductors will more tellingly ravage the innocents and most vulnerable amongst us, severing them of life, limb and livelihood. Thankfully the “spirit” behind the critical and urgent necessity of #ENDSARS agitations which encapsulates every patriotic Nigerian's desire to move away from public rot and bad governance cannot be stopped or waylaid. That genie have since left the lamp!

Peaceful and altruistic advocacy and contributions must be the watchword and in this, although I could reel out quite a few commendations, let me representatively laud a young selfless Medical Doctor who I have encountered, named Nonso Egemba (@AprokoDoctor), who has coordinated other Doctors in providing first responder services to protesters. Not only does the "Hippocratic Oath", live well and true but his service reflects the best of our youths, some of whose sacrifices and contributions during these protests have been the stuff of legends.

For the political class – majorly constituted by idlers, botchers, rudderless and steeped in orgiastic cupidity – the bells are tolling! If they have not been sufficiently roused out of their cocooned miasma, then they need look no further than the live optics coming off the streets. They should take heed, as if this festers and a general conflagration ensues – there will be no hiding place for them!

Surmising – days after incidents of attacks on private and more worrisome, critical public infrastructure became the trend, these destructions continued unabated. This, in a country already seemingly overwhelmed by pervasive insecurity – no clearer writing need be on the wall. Water is wet, yeah, obviously!

The authorities must see their way towards putting a stop to the ongoing binge of slaughter and destruction going on in our streets, but not with the – with immediate effect tone.

Empathy, compassion and understanding will serve much better. The looming spectre of the African proverb that says : "a child who is not embraced by the village will burn it down to feel it's warmth" – should be averted from becoming reality.

Exhausted, in spirit and in truth – may the Almighty grant eternal rest and peace to the souls of the departed cut down brutally in Lekki and across the country. May these roses cut down, crushed and never to blossom, be risen as martyrs to forever watch over us all accordingly – killers and citizens.