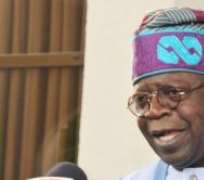 A group of Fulani elders under the aegis of Concerned Fulbe Forum, has condemned Bello Bodejo, a self-styled leader of Miyetti Allah Kautal Hore (a handbag Fulani association) who alleged without evidence that the APC National Leader, Asiwaju Bola Ahmed Tinubu, was sponsoring End SARS protests across the country.

The group questioned the state of mind and leadership credential of Bodejo in aspiring to lead Miyetti Allah Kautal Hore.

Pointing out the contradiction in terms, claiming that the same Asiwaju Tinubu whose properties have been massively destroyed in Lagos is allegedly sponsoring the people destroying his assets.

In a statement signed by its Chairman, Abubakar Ardido Suleimanu, and Secretary-General, Junaidu Gidado Hamza, the Fulbe Forum said: “We read with awe and great disappointment a statement credited to Bello Bodejo, the self-styled leader of Miyetti Allah Kautal Hore (a handbag Fulani association), who alleged that the National Leader of APC Asiwaju Ahmed Bola Tinubu is sponsoring the ongoing protests in some parts of Nigeria tagged #EndSARS.

“A mad man walking naked in the streets would always assume everyone else is also naked. This depicts the present state of mind of Bello Bodejo and his co-travelers in the world of the insane. Bello Bodejo and the association he is leading do not and will not in any way whatsoever represent the Fulani in Nigeria as he is alleging.

“Bello Bodejo registered Miyetti Allah Kautal Hore Association in order to remain relevant in the scheme of things. He has so far succeeded in pitching the hapless pastoralists against their fellow Nigerians through his unguarded utterances. Bodejo is a clown masquerading as a leader to seek cheap popularity among gullible Nigerians.

“His gory antecedents speak for itself. Otherwise, how could one in his right senses utter such unfathomable accusation to a man who is toiling day and night to instill the right democratic culture in our national polity? Early this year, the same Bello Bodejo granted an interview castigating the National Leader simply because of his inalienable rights to contest the presidency of his fatherland. What are the grudges of Bello Bodejo and his team against BAT?

“We are responding to this spurious assertion not because Bodejo deserves any response. No. We are pained and constrained to respond noting the monumental losses Asiwaju Bola Ahmed Tinubu has been subjected to by miscreants protesting at present. His person, family and businesses were not spared.

“Only on Wednesday afternoon, his business organizations were torched by the protesters. How could someone in his right senses accuse a victim of the protests of sponsoring the same protest? Could he sponsor miscreants to destroy his personal properties? Surely, Bello Bodejo urgently needs a psychiatrist evaluation!

“We are worried about Bodejo and his antecedents, which are clearly antagonistic towards the APC leader. We are equally not oblivious of who Bello Bodejo is, his questionable character as well as his penchant for supporting unholy alliances to satisfy his masters in the fetish world he is living in.

“When moments of truth arrive, no Marabout is competent enough to stop the will of God Almighty from been actualized. He can only deceive his followers and cohorts in the secret world of fake spirituality supported by fake prophets both here and in India where his deities are. We cannot be cowed any longer by people living a fake life.

“The Fulani Community, which Bodejo is purportedly leading doesn’t give him any mandate to speak on their behalf. He is rather leading them into oblivion and bringing them into acrimony with other Nigerians. With leaders like Bodejo, Fulanis don’t need to find who their enemies are outside of them. We are carefully documenting Bodejo’s vituperative outbursts and unguarded utterances towards the APC leader and he will soon hear from us. We will seek redress accordingly as law-abiding citizens.”