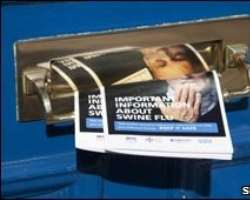 By Nick Triggle
The contracts negotiated by the UK government for a swine flu vaccine should have had get-out clauses to protect taxpayers' money, experts say.

An independent review, led by Dame Deirdre Hine, a former chief medical officer for Wales, said that was just one of the lessons that should be learned.

Some of the communications about the pandemic were confusing, it added.

But the review praised the overall approach taken.

The review said the four devolved administrations worked well together.

And it said the spending – more than £1.2 billion in total on preparing and responding – was justified.

The review said without such a thorough approach the consequences could have been disastrous if the pandemic had proven to be more severe.

But the review team acknowledged the UK government should have cut a deal over vaccines.

'Threat remains'
More than 30m doses are thought to be left over after one of the manufacturers, GlaxoSmithKline (GSK) refused requests for the contract to be torn up.

The other manufacturer, Baxter, agreed to a “break clause” allowing the government to cancel its order.

The review makes 28 recommendations aimed at ensuring a better response to any future pandemic.

Dame Deirdre said: “It is important that the experience of 2009 does not lead to complacency.

“The threat of a flu pandemic remains and the next one could be very serious.”

Hundreds of thousands of people were infected with the virus, although most only had relatively mild symptoms.

However, more than 400 people still died in the UK.

Pregnant women and young children tended to be the worst affected.

The UK had been planning for a pandemic for years.

Originally it was thought it would be caused by bird flu, which would probably have meant a much more severe pandemic.

Containment
When swine flu emerged in April last year the government already had stockpiles of anti-flu drugs to lessen the symptoms and pre-contract agreements in place for vaccines.

This level of planning was praised by the review.
When infections started occurring in the UK, the authorities initiated a containment approach. This involved giving anti-flu drugs to anyone who had come into contact with an infected person.

The review said there was no definitive proof this had worked in slowing the spread.

The use of the phrase containment was also criticised along with others for confusing the public. It said there was a perception the approach was designed to stop the pandemic spreading completely instead of just disrupting it.

There was also criticism of the projections given for deaths.

In England, officials released the worst-case scenario figures which at one point were saying there could be more than 60,000 deaths.

This caused confusion, the report says, as some interpreted it as a straight prediction.