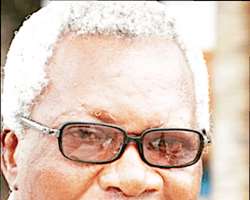 Another great loss hit the Nigerian literary community in the early hours of Tuesday, as Prof. John Pepper Clark (popularly known as J.P. Clark) joined his ancestors at 85.

His death was disclosed in a statement signed by Prof. C. C. Clark (for the family) and Mr. Ilaye Clark (for the children), and which was made available to newsmen on Tuesday morning.

The statement reads, “The Clark-Fuludu Bekederemo family of Kiagbodo Town, Delta State, wishes to announce that Emeritus Professor of Literature and Renowned Writer, Prof. John Pepper Clark, has finally dropped his pen in the early hours of today, Tuesday, 13 October 2020.

“Prof. J. P. Clark has paddled on to the great beyond in comfort of his wife, children and siblings, around him.

“The family appreciates your prayers at this time.

Other details will be announced later by the family.”

Until his death this morning in an undisclosed Lagos hospital after a brief illness, Prof. J.P. Clark was a professor of English and renowned poet and playwright. His outstanding works include: Poems (poetry, published 1961),

1991, Clark received the Nigerian National Order of Merit Award for literary excellence, among other recognitions that define him as one of Africa's pre-eminent and distinguished authors.

It is worthy to note that J.P. Clark died an octogenarian, which was also same for Nigeria's Chinua Achebe, Nigeria's Chukwuemeka Ike, Cameroon's Ferdinand Oyono, South Africa's André Brink, Kenya's Grace Ogot, Nigeria's Elechi Amadi, Malawi's David Rubadiri, among other great writers who were obviously of the same generation in the field of pen, including Nigeria's Gabriel Okara and Buchi Emecheta who died a nonagenarian and a septuagenarian respectively.