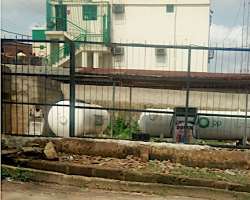 Barely a week after a gas explosion in Baruwa, Iyana Ipaja area of Lagos state that claimed no fewer than five lives, razed 25 buildings, 16 shops, and a private school building, another plant is currently being sited along the ever busy Demurin/Alapere road, Ketu, part of Lagos., a Non Political, Non Governmental Organization in the state, the Social and Economic Justice Advocacy (SEJA) has alerted the nation of a possible explosion in Alapere Ketu, area of Lagos state.

Speaking through a statement signed by Barrister Stanley Karo Emeluaha, the Group’s Executive Director (Legal) and made available to Journalists in Lagos, SEJA described the gas plant sited in a densely populated residential area as a disaster waiting to happen, and wondered why any responsible and responsive government should allow such a development in the face of previous experiences in the state and the nation at large.

The details of the statements as issued by SEJA among other concerns noted that while we are still mourning the huge human and material carnage in Baruwa, it is important to draw the attention of all men and women of good will, Kosefe local government area, Lagos state government and the federal government to the fact that another gas plant is currently being sited along the ever busy Demurin/Alapere road, Ketu, part of Lagos.

The construction of the gas station, aside enunciating the insensitivity and regulatory gaps, and further paints a picture of a people that are not ready to draw lesson from previous experiences, there are key signals that points to a grim reality: Allowing a gas plant in a densely populated residential area such as the Demurin/ Ketu axis is another time bomb waiting to explode.

Very fundamental is the awareness that the plant shares a common fence with Globacom communication Customer centre, reputed for not being customer free and a welding and Fabrication Company with high pressure equipment's.

This is in addition to the fact that just a stone's throw from the plant is a 330KVA National Grid line. Also ringing apprehension is the consciousness that the same spot houses Saint Michael Catholic Church, arguably the biggest church in Ketu with over 6000 worshipers.

Notedly, the worshippers gain entrance to the church via the bus stop where this gas plant is located.

As a people we must also not fail to remember the March,2020 incident where about 23 people were killed and more than 50 houses destroyed when a massive explosion rocked Abule Ado area of Lagos state. Among those who lost their lives were a family of four and Henrietta Alokha, an administrator at Bethlehem Girls High School, a Catholic-owned school where at least 60 students sustained injuries from the incident.

While it is imperative at this point to acknowledge that provision of security, pursuit of economic welfare of citizens and improving the life chances of the people are the constitutional responsibilities of the state which all leaders must achieve, every leader is expected to proactively perform this role at the most fundamental level.

Against this backdrop, it becomes expedient that the Babajide Sanwoolu led administration in Lagos, and the Department of Petroleum Resources prove themselves both responsive and responsible by their swift intervention.

Lagos can certainly not afford another needless human and material carnage arising from gas plant explosion.