Appointmemt Of An Apc Fanatic Onochie As National Commissioner Of Inec Is Direct 'murder' Of Inec-: Huriwa. 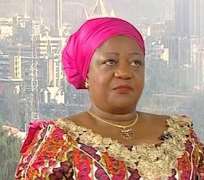 THE CONCERNS:
The Human Rights Writers Association of Nigeria (HURIWA) has learnt of the appointment of Special Assistant on Social Media to President Muhammadu Buhari; Lauretta Onochie, as an electoral commissioner of the Independent National Electoral Commission representing Delta State.

President Buhari had appointed Lauretta Onochie as his social media aide in 2015 following his victory at the polls against the former President Goodluck Jonathan. Alongside other media aides, her appointment was renewed in 2019 after the President won his second term elections

Lauretta Onochie is known on social media for peddling fake news and pictures as some of her claims have been proven to be false including tweeting false pictures to praise the Buhari administration.

One of the factors that have compromised the credibility of elections in Nigeria is said to be the lack of structural independence of INEC. This was one of the main issues taken up by the Electoral Reform Committee in 2007.

Among the recommendations that the Committee made was the necessity for guaranteeing the independence of INEC, both through the way that the Commission is funded and through the appointment process for its members.

OUR POSITION AND DEMANDS:
The Human Rights Writers Association of Nigeria (HURIWA) is by this statement vehemently and unequivocally rejecting in its entirety, the appointment of Lauretta Onochie; the Special Assistant to President Muhammadu Buhari on Social Media and a fanatical All Progressives Congress member as an electoral commissioner of the Independent National Electoral Commission.

It’s on record that since the inception of the current administration; Nigerians have witnessed serial constitutional violations in appointments. This appointment constitutes a direct violence against the independency of INEC and Nigerians should not in any way accept it. We urge the Senate to reject this appointment if they are real democrats or Nigerians may pour out on the streets to protest this brazen illegality to demolish constitutional democracy through insider political compromises. WE CALL ON CSOs TO CHALLENGE THIS ILLEGALITY IN THE COURTS OF LAWS.