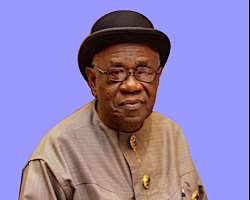 All is now set for the final burial rites of former Nigerian Federal Petroleum Minister and frontline Niger Delta Elder and Leader, Late Chief Dr. Mofia Tonjo Akobo (CON) who died earlier this year in March 2020 after a brief illness. According to the funeral programme released by the family, there will be Night of Tributes online via zoom on Wednesday 7th October 2020, before the final interment on Saturday 10th October 2020 at his hometown in Tombia, Degema Local Government Area Of Rivers State, Nigeria.

The Late Chief Dr. Mofia Tonjo Akobo was a jolly man, full of stories, jokes, and laughter. He was fondly referred to as the family historian because whatever he learned he never forgot, and always loved to share. He was Born in Abonnema into the family of Mary John Akobo (nee Fyneface of Abonnemain AKULGA, and Nathaniel Tonjo, Akobo of Tombia in DELGA all in Rivers state in July 1934.

In 1955, he was awarded the Elder Dempster Lines of Unilever Brothers Group scholarship to the United Kingdom for a 3 weeks education. It was an important educational programme that gave him his first experience in Europe & western civilization. He had a short teaching period in Government Secondary School Owerri, September 1955 – July 1956.

After the civil war, he returned to Port Harcourt and went into private medical practice. He established the Teme Medical Klinik Association Limited in 1971. As a Medical Doctor, and was extremely benevolent to many families.

In his lifetime, M.T. Akobo served Rivers State and indeed the entire country in various capacities. In April 1972 he was appointed Commissioner for Works by the then Rivers State Government. He served the state in this capacity until August 1973. During his tenure as Commissioner for Works, he alongside his team, created the Marine Bases, the first Marine Base in Port Harcourt, three others, and the one in Yenagoa. They created the Rivers State Transport Corporation, Utility Board, and Rural Electrification.

From 1973 to 1974, he served as the Rivers State Commissioner for Economic Planning and Reconstruction. Constructing the Rivers State Civic Centre was conceived by him and the Governor accepted the concept; he worked with Architects Alex Ibru and Architect Doris (Spiff’s sister) and Eben Spiff were the Director of Sports. He was appointed the National Sports Commission and first Chairman of Rivers State Sports Council in August 1969 – 1975 when the Rivers State Government was still in Lagos.

Because of his hard work and his enviable achievements with the previous portfolios, the Rivers State Government, again in 1975, appointed him as Commissioner for Finance, Rivers State. In that same year, M.T. Akobo was appointed as the Federal Commissioner (Minister) of the newly created Petroleum and Energy Ministry.

In December 1975, as OPEC Minister in Vienna, he became involved with the Carlos terrorist hijack. He was the OPEC Minister in Vienna under President General Murtala Mohammed; he concluded the signing of contracts of the Warri Refinery and advanced the development of the Kaduna Refinery. On the 13th February 1976, the eve of Valentine, General Murtala Mohammed was killed in a coup d’état. The coup d’état failed, the old government was not sacked, but there was a change in character and direction. He served in this capacity until 1976; he was retained in the Executive Council of the new Head of State under General Olusegun Obasanjo but re-assigned to be Minister of Economic Planning and Development. He was highly involved in the establishment of ECOWAS at the ministerial level and establishment of the Niger Delta Basin Development Authority.

After his tenure as Minister, M.T. Akobo continued to serve Nigeria in various other capacities and developed his own private medical practice in Port Harcourt. In 2007, in recognition of his merits and service to Nigeria, Chief (Dr) M.T. Akobo was honoured with the Commander of the Order of the Niger (CON) National Award.

Amongst his other involvements as an activist are:

* Founder and elder council member of the Ijaw National Council [6]

*Executive delegate member of G34, which fractions of it transformed themselves to the PDP (Peoples Democratic Party)

The Late Chief M. T Akobo was married to Mrs. Data Ine Akobo, Nee Amachree, a retired deputy Librarian of the Rivers State University of Science and Technology, and is blessed with wonderful children and grandchildren.