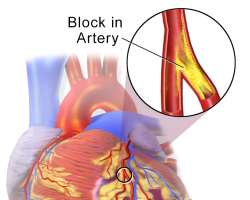 The online dictionary, www.oxforddictionaries.com defines Silence as “The avoidance of mentioning or discussing something.” It goes further to illustrate the meaning further by saying “Politicians keep their silence on the big question.” Martin Luther King jnr. in one of his classical quotes said “Our lives begin to end the day we become silent about things that matter.” One of the issues that has for long been treated with abject silence in our contemporary society is Heart Attack otherwise known as the “silent killer”.

Heart attacks, known as the “silent killer," according to cardiologists usually occur as a result of the build-up of fat, cholesterol and other substances in the heart’s arteries, blocking the blood flow and therefore cutting the supply of oxygen and nutrients to the body. Most people who suffer from a heart attack have some form of coronary heart disease.

To this day, heart diseases still pose as a serious threat to millions of Nigerians. As rightly said by Martin Luther King Jnr as mentioned in the foregoing, people are truly silent about things that matter. For instance, World Heart Day 2020 was celebrated on September 29, 2020 but not many Nigerians knew about it. If it were to be other issues that come in the form of entertainment, millions of Nigerians would have known about it. The day is celebrated every year on September 29 to increase awareness about heart related cardiovascular disease. It includes heart diseases and brain strokes. The day was set aside globally for the promotion of a healthy lifestyle among people and also to make them aware of the seriousness of Cardiovascular Diseases (CVD).

According to the World Heart Federation, cardiovascular diseases are accountable for nearly half of all non-communicable diseases which makes it the leading cause of loss of lives every year.

As gathered, cardiovascular health can be improved if regular walk is carried out for just 30 minutes 3 times. Medical experts also advised that the risk of heart disease can be reduced by 30 percent to 40 percent if anyone does the walking in a brisk manner for 3 or more hours a week. Not only can anyone’s lifespan is increased for up to 5 years if he or she walk 2 or more miles a day, the blood pressure is equally lowered, and unwanted pounds will in that process be dropped as well as raise the good (high-density lipoprotein (HDL) cholesterol in as little as within a spate of 18 weeks.

While bemoaning the fact that majority of Nigerians were not aware that September 29 is yearly dedicated to mark World Heart Day, one cannot exonerate the government as none of its ministries such as the federal ministry of health and federal ministry of information can be said to have lived up to expectations.

According to the World Health Organization, “Health literacy can be improved through the provision of information, effective communication and structured education. Most communication and health education interventions remain focused on personal health and lifestyles. There is a real need to develop, implement and evaluate such interventions to improve knowledge, understanding and capacity to act on social, economic and environmental determinants of health.

Governments can take a strong leadership role in developing and implementing health literacy promotion policies by providing sustained funding, setting up special projects, coordinating action across sectors, and conducting health literacy surveillance regularly. Improving and measuring health literacy (both strengths and needs) is particularly important in poorer areas, such that vulnerable populations are empowered to engage in early and sustained health promoting actions, whether to prevent acute and chronic conditions or to promote active and curative treatments”

Permit me to say that in the course of gathering background materials for this piece that I stumbled on the forward to the National Health Promotion Policy signed by Professor Isaac F. Adewole, Minister of Health, in February, 2019 and posted on the website of the federal ministry of health.

In the opening paragraph, the minister stated, “Available evidence indicates that Health Promotion is an effective tool for galvanizing individual and collective health actions aimed at preventing diseases, improving the health and wellbeing of the populace as well as ensuring a healthier society for all. In furtherance of the Federal Government of Nigeria’s stewardship role of improving the health of the Nation, the first edition of the National Health Promotion Policy (2006) and the Strategic Framework for its Implementation (2007) were developed to strengthen the Health Promotion capacity of the National Health System.

Against the foregoing backdrop, I doubt if the leadership of the ministry is in any way walking the talk. Contrariwise, it is germane to opine at this juncture that the late Professor. Olikoye Ransome-Kuti as a minister of health not only made health issues a priority but ensured he created public awareness and understanding about them, particularly on public health issues relating to primary health care, safe motherhood, child survival and HIV/AIDS throughout sub-Saharan Africa. In as much as this piece is not intended to be a memorial on the earthly journey of the Professor that ended on June 1, 2003, it is pertinent to posthumously praise him for his exemplary service as the minister of health. Suffice it to say that the late Professor lived to give the health sector a direction, and that in that direction lies the success of the health sector. No doubt, he left a template that would guide the direction of the health sector. Unfortunately, it appears the template is yet to be duplicated by any minister of health since he died.

Considering the fact that a healthy nation is a wealthy nation, according to a popular axiom which emphasizes the significant position of health in the development of any nation, I am in this context urging the government to reinvigorate it's health communication systems, and begin to reach out to the people through robust information on diverse diseases and medical issues generally. It is expedient that government step up its communication machineries in the sector as it takes a healthy person to work or attend to obligations, duties, assignments, tasks and jobs in every society.